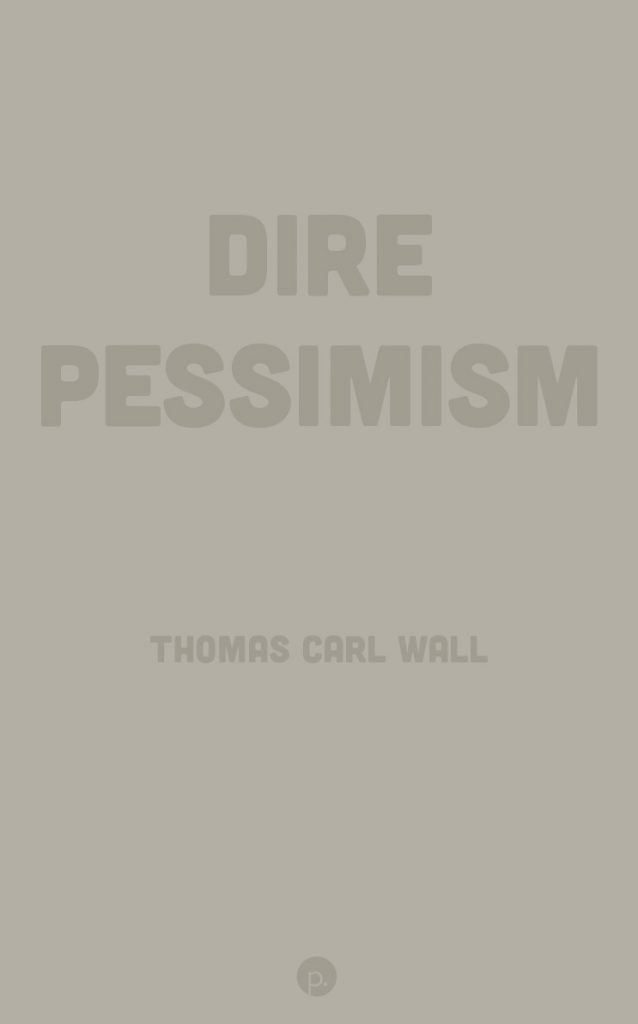 Dire Pessimism conceives of pessimism within a modern political/historical context. Indeed, its thesis is that the experience of pessimism has replaced the experience of lived history, which is historically necessary at this time but ought not coagulate into dogma. In between, Wall looks at a range of ways in which pessimism influences morality, theory, philosophy, literature, and politics. The exposition is oblique; it is akin to Jean-Luc Godard’s Histoire(s) du Cinéma, which is a subjective essay rather than a straightforward documentary or streamlined polemic. Wall does not love pessimism as Godard loves cinema, but thinks that pessimism has become as pervasive as cinema once was.

Instead of proposing a comprehensive and per se philosophical or psychological definition, Dire Pessimism organizes the work into a taxonomy of pessimism parsed into four types: Greek, Gnostic, Prophetic, and Aesthetic. Each, Wall claims, harbors within it metaphysical/ontological commitments. The treatise discuss exemplars of each from a contemporary Anglo-analytic moral philosopher, a late-twentieth-century theoretical sociologist, an anachronistic American diarist, a contemporary French novelist, and a contemporary Speculative Realist—none of whom refer to each other, which to me exemplifies the extent of the pervasiveness of pessimism among intellectuals and aesthetes in different arenas in the modern era.

Thomas Carl Wall is a graduate of the University of Washington and has been a professor of English and Cultural Studies for several years at Taipei Tech in Taiwan. He has published previously on Maurice Blanchot, Emmanuel Lévinas, Giorgio Agamben, Gilles Deleuze, Harmony Korine, and Terrence Malick.