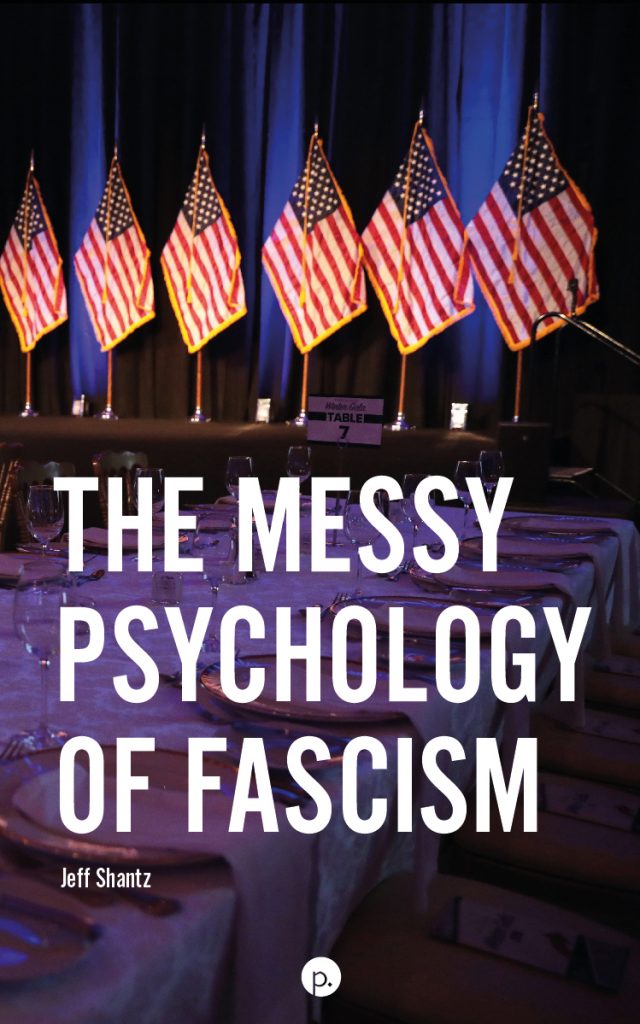 This is a time of fascism. Beyond actual ruling governments, fascist movements have mobilized openly in virtually all of the Western countries where so-called liberal democratic government supposedly prevails—Australia, Canada, England, France, Greece, Italy, Norway, the United States—to name only a few. In the US, of course, the figure of Trump has provided a concentration point—a rallying figure—for neofascists.

It has become more and more apparent that there are much more than typically economic and political forces stirring. Racism, misogyny, feelings of deprivation, economic resentments, more.

What, in particular, explains the support shown by the very people who might be feeling economic uncertainty for a billionaire whose entire life history was an affront to working class and poor people? How to explain the expressed love for the billionaire with the golden toilet by those who felt their own lives were going down the drain? How to explain the frenzy to which people worked themselves up in cheering on the offensive (racist, sexist) ravings of the billionaire con man? How to explain the open cheers for bullying and meanspirited targeting of inoffensive targets by people who otherwise would have seen themselves as decent, “salt of the Earth,” regular folks?

In addressing the mass phenomena being manifested in US politics, The Messy Psychology of Fascism deploys the works of Wilhelm Reich and his writings on the mass psychology of fascism, Felix Guattari and his work on micropolitics, and C .Wright Mills, especially his notions of anonymous insincerity and the sales mentality as dominant cultural forces in consumer capitalism.

This critical psychological approach connects psychological factors, cultural, personal drives, with political economy, with social and economic structures and processes. Throughout the analysis presented here the psychological and political economic are brought together. One informs and enlightens the other toward an overall examination of, an understanding of, a bigger picture, larger (mass) forces.

Jeff Shantz is an anarchist writer, poet, photographer, artist, and organizer with decades of participation in community movements and as a rank-and-file workplace activist. He currently teaches social justice, critical theory, state and corporate crime, and community advocacy at Kwantlen Polytechnic University. He is project lead on Anti-Poverty/Criminalization/Social War Policing at the Social Justice Center in Surrey (Unceded Coast Salish territories). Shantz is the author and/or editor of more than 20 books, including Cyber Disobedience: Re://Presenting Online Anarchy (with Jordon Tomblin, Zero Books, 2014), Anarchy and Society: Reflections on Anarchist Sociology (with Dana Williams, Brill/Haymarket, 2013), Green Syndicalism: An Alternative Red/Green Vision (Syracuse University Press, 2012), and Constructive Anarchy: Building Infrastructures of Resistance (Routledge, 2010). His most recent books are Organizing Anarchy: Anarchism in Action (Brill/Haymarket 2020) and Classic Writings in Anarchist Criminology: A Historical Dismantling of Punishment (with Anthony J Nocella and Mark Seis, AK Press, 2020). His Crisis and Resistance Trilogy is freely available at punctum books. Shantz is co-founder of the Critical Criminology Working Group, Anti Police Power Surrey (APPSurrey@gmail.com) and founding editor of the journal Radical Criminology. Samples of his writings can be found at jeffshantz.ca. Follow on twitter @critcrim.

2 thoughts on “The Messy Psychology of Fascism”