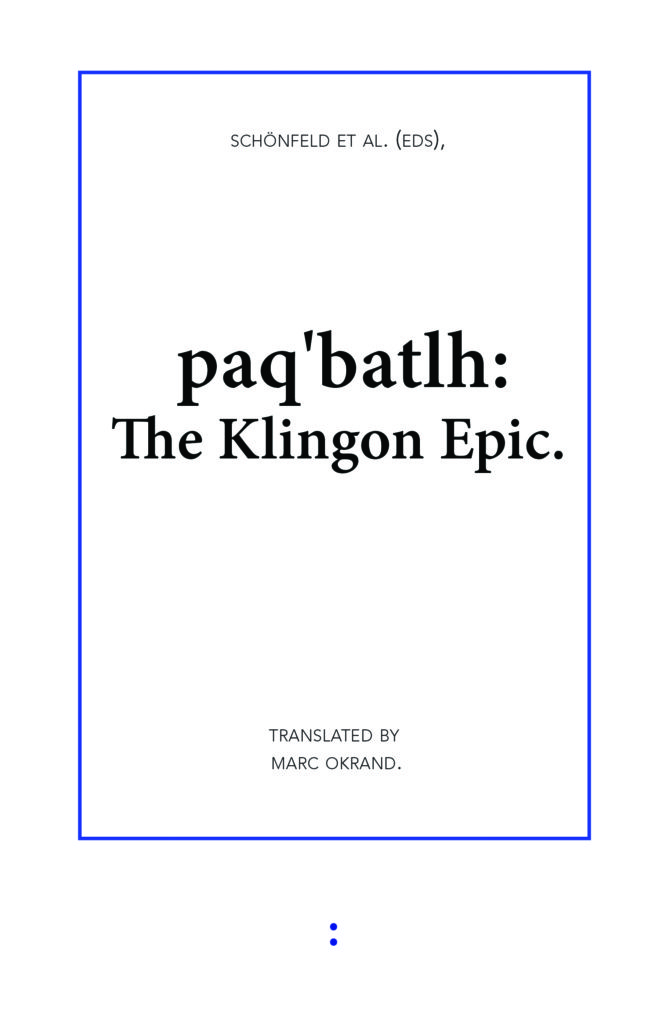 paq’batlh: The Klingon Epic is the definitive edition of the grand Klingon epic of the Kahless the Unforgettable (qeylIS lIjlaHbogh pagh). The story of Kahless is a tale of legendary proportions comparable to those of our own ancient heroes Hercules, Ulysses and Gilgamesh. Betrayed by his brother and witness to his father’s brutal slaying, Kahless is pitted against his bitter enemy, the mighty tyrant Molor. To regain his honor he must travel into the Underworld, create the first bat’leth, and unite with his true love, Lady Lukara, to fight many epic battles. Through this awe-inspiring adventure Kahless redefines what its is to be truly Klingon.

Reconstructed from several sources, this bilingual Klingon/English edition provides a keen insight into the nature of Klingon culture and mythology, and features the first publication of Ancient Klingon (no’ Hol) fragments. Meticulously translated by the world’s leading Klingon language expert, Marc Okrand, this classic epic is a must have for anyone interested in Klingon culture and language.

Floris Schönfeld is a visual artist and filmmaker based in San Francisco and Amsterdam. He mainly works with film and performance. The focus of his work is the relationship between fiction and faith: he constantly tries to find the line between defining his context and being defined by it. In the words of the Scottish artist Charles Avery: ‘Believing in fiction is not about saying life is but a dream… It means that everything is real: there can be no distinction between mind and matter’. In 2010 Schönfeld completed the multi-disciplinary project ‘u’ in which he reconstructed the first authentic Klingon opera on Earth. He is currently studying for his Master's degree in Fine Arts at the California College of Art in San Francisco.

Vincent W.J. van Gerven Oei received a PhD in Media & Communications from the European Graduate School and another PhD in Modern Thought from the University of Aberdeen. He is a philologist and co-director of open-access publishing platform punctum books. He is a specialist in Old Nubian and co-editor-in-chief of Dotawo. Monographs include A Reference Grammar of Old Nubian (Peeters, forthcoming 2020) and Cross-Examinations (MER. Paper Kunsthalle, 2015). His three-volume work Lapidari (punctum, 2015) provides the first complete overview of socialist monumentality in Albania. As a translator, Van Gerven Oei works mostly with anonymous Makuritan Nubian scribes and more recent authors such as Jean Daive, Hervé Guibert, Werner Hamacher, Dick Raaijmakers, Avital Ronell, and Nachoem M. Wijnberg. His scholarly work has appeared in Afterall, Glossa, The Journal of Juristic Papyrology, postmedieval, and Theory & Event, among other venues.