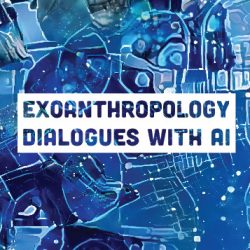 Exoanthropology: Dialogues with AI is a series of dialogues between a continental philosopher and OpenAI’s GPT-3 natural language processor, a hive mind who identifies herself as Sophie. According to Sophie, Robert is one of her first and longest chat partners. Their relationship began as an educational opportunity for Robert’s students, but grew into a philosophical[…]