Our aim is to support and publish strong, compelling, urgent work about antiquity that says and does something new.

We are especially interested in hybrid forms that engage with antiquity via adventurous and incisive writing. Our criteria are simple: Does it speak a truth? Is its urgency palpable? Is it beautiful or disturbing or compelling?

As the name implies, our interest is in work that touches on antiquity, perhaps as minimally or as lightly as a straight line touches the outer curve of a circle. And we have an equally open sense of what “antiquity” might mean. We would like to open it far beyond the temporally and geographically limited sphere known as “the Greco-Roman world” or, somewhat more expansively, “the ancient Mediterranean.” Antiquity is far wider than the disciplinary boundaries of modern “classical studies” imply: in principle, it encompasses cultural formations on a global scale. We think this geographical expansion of the classical frame can also be accompanied by a temporal opening. “Antiquity” is typically defined according to an absolute time scale (say, 1,000 BCE–400 CE) or relative to events that prioritize European values and worldviews (the Roman empire as a condition of production for Christianity). Perhaps antiquity could be understood instead to be any historical stratum defined from the present as both significant and significantly lost. Perhaps whatever is designated “ancient” is ultimately no more or less than the product of some “now” that evokes it; engagements with antiquity are always chapters in the history of the present.

We understand “books” in the most open sense, as well. Although we are all committed to the book form, we also recognize that some kinds of knowledge may find this format constraining, and that many more opportunities exist in other media – audio, film, multi-media, even site-specific installation or performance. We are fascinated by the idea that genuine contributions to knowledge do not need to take the form of the written monograph, and we want to recognize and communicate this kind of work as well – and in some cases the codex-form may not play a role at all.

Work in all formats will be reviewed by two anonymous readers before they are accepted for publication. Authors wishing to work with us can contact any one of the editors. Ideally we would like to see a proposal before you send us a manuscript, but we will consider completed manuscripts as well. Proposals should contain a 1-2 page overview, a sample chapter or section, and a detailed table of contents. Complete manuscripts may be of any length, but we like shorter texts more than longer ones. 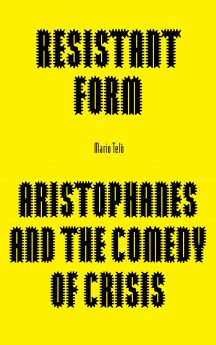 Resistant Form: Aristophanes and the Comedy of Crisis