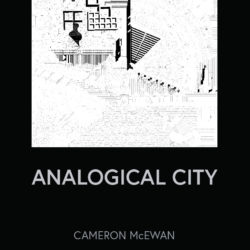 In Analogical City, Cameron McEwan argues for architecture’s status as a critical project. McEwan revisits architect Aldo Rossi as a paradigmatic figure of the critical rational tradition, studying a neglected aspect of his thought — the analogical city — to excavate its potential. McEwan develops a grammar of the analogical city under the headings of[…]