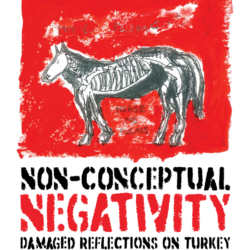 Non-Conceptual Negativity: Damaged Reflections on Turkey critiques those who have accused Deleuze of an unbounded affirmation which, according to them, has played directly into the hands of capitalist modes of production. Yet no one has acknowledged that under the aegis of nano-fascism, late capitalism has grown into Neanderthal capitalism, invented and developed in laboratory countries like[…]