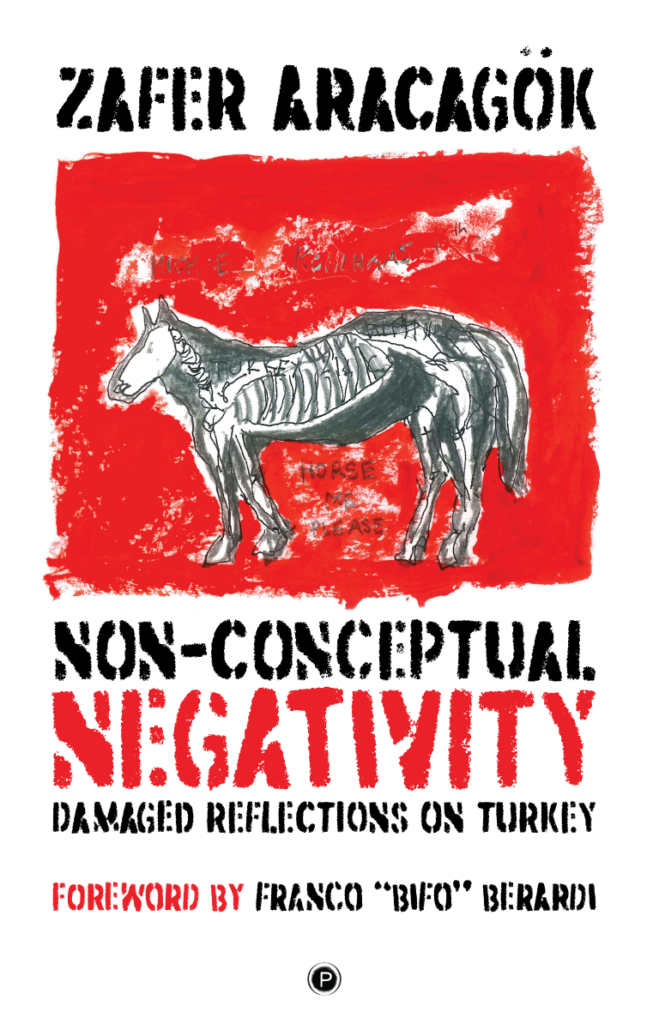 Non-Conceptual Negativity: Damaged Reflections on Turkey critiques those who have accused Deleuze of an unbounded affirmation which, according to them, has played directly into the hands of capitalist modes of production. Yet no one has acknowledged that under the aegis of nano-fascism, late capitalism has grown into Neanderthal capitalism, invented and developed in laboratory countries like Turkey with the aid of an international Neanderthal league.

Layer upon layer, Aracagök explains in fragmentary fashion that it is not only a matter of how Turkey has grown into a prime laboratory of nano-fascism with the aid of the US and the European Union, but also how the results obtained from this laboratory are put into practice in different countries under Neanderthal capitalism, enslaving each and every one of us into accepting even the position of suicide bomber. As none of us is exempted from nano-fascism today, perhaps it is timely to reconsider the ways in which Deleuzian thought is appropriated in the form of an unquestioned affirmation of everything and how its critique has ended up in an old-fashioned formulation of the in-dividual according to a party program.

If this all goes to show that we are face to face with a route different from the accepted forms of affirmation — that is, if we are all affirmed and seem to be happily affirming life as it is as a result of the Neanderthal manipulation of the negative — then isn’t it timely to rethink the Deleuzian affirmation in its non-originary origin with regard to Adorno’s resistance against affirmation? That is, the double negation never ends up in affirmation, and if it does so, it might mean your negation is not strong enough.

Zafer Aracagök is a philosopher, musician, and artist who taught art theory and continental philosophy at various universities in Turkey for over 20 years. He is the author of three fiction and theory books in Turkish and a number of articles addressing the issues of image, resonance, and noise in continental philosophy and in the philosophy of Deleuze and Guattari in journals such as Revue Chimères, Pli: The Warwick Journal of Philosophy, Parallax, Third Text, Rhizomes, Postmodern Culture, and Symploke. Among his more recent works are I Want To Be a Suicide Bomber (Little Black Cart, 2013); Zeminsiz Üçleme, (Kült Neşriyat, 2014); and Atopological Trilogy: Deleuze and Guattari (punctum, 2015). The Turkish translation of Atopological Trilogy was published by Kült Neşriyat in 2015. Non-Conceptual Negativity: Damaged Reflections on Turkey first appeared in Turkish (Sub Press, 2017) and was followed by a collection of articles, written in Turkish, on contemporary art and philosophy, Art: What Is There If Here's Where? (Sub Press, 2018). He is one of the advisory editors of Rhizomes and Kaos Queer+, and he publishes monthly articles on arts and philosopy in Istanbul Art News. You can follow his work on his official website.

One thought on “Non-Conceptual Negativity: Damaged Reflections on Turkey”