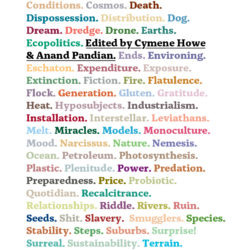 The idea of the Anthropocene often generates an overwhelming sense of abjection or apathy. It occupies the imagination as a set of circumstances that counterpose individual human actors against ungraspable scales and impossible odds. There is much at stake in how we understand the implications of this planetary imagination, and how to plot paths from[…]