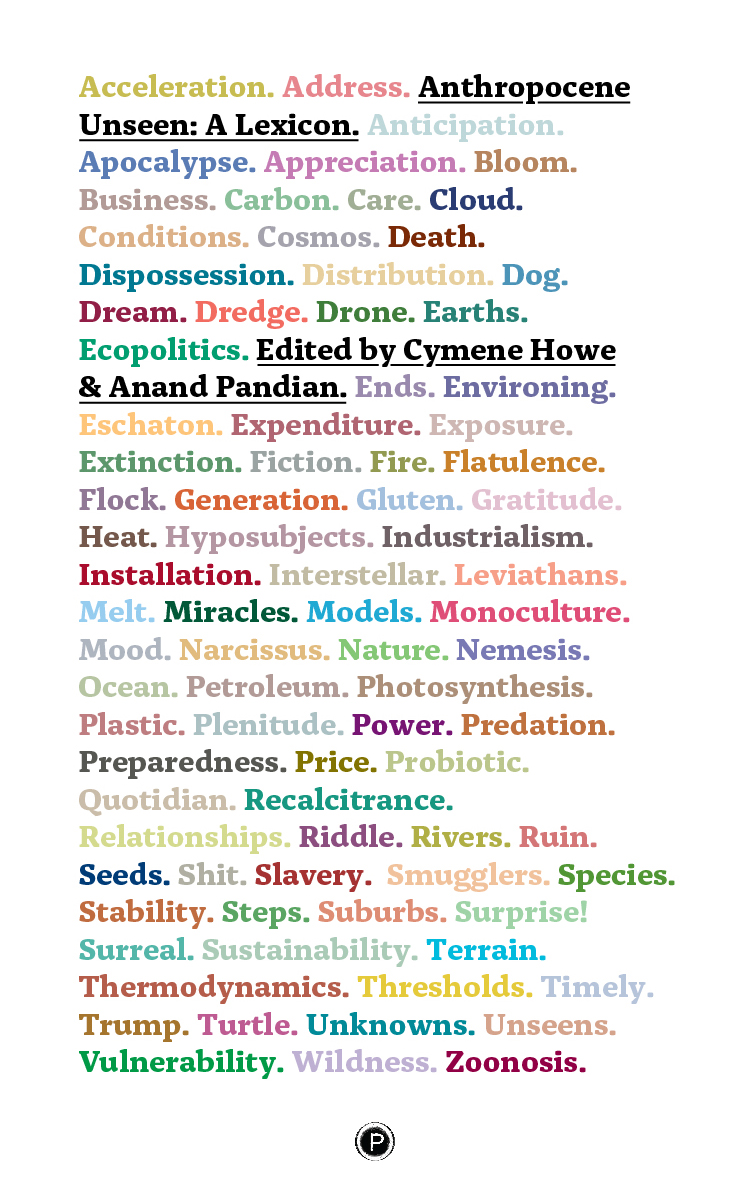 The idea of the Anthropocene often generates an overwhelming sense of abjection or apathy. It occupies the imagination as a set of circumstances that counterpose individual human actors against ungraspable scales and impossible odds. There is much at stake in how we understand the implications of this planetary imagination, and how to plot paths from this present to other less troubling futures. With Anthropocene Unseen: A Lexicon, the editors aim at a resource helpful for this task: a catalog of ways to pluralize and radicalize our picture of the Anthropocene, to make it speak more effectively to a wider range of contemporary human societies and circumstances. Organized as a lexicon for troubled times, each entry in this book recognizes the gravity of the global forecasts that invest the present with its widespread air of crisis, urgency, and apocalyptic possibility. Each also finds value in smaller scales of analysis, capturing the magnitude of an epoch in the unique resonances afforded by a single word.

The Holocene may have been the age in which we learned our letters, but we are faced now with circumstances that demand more experimental plasticity. Alternative ways of perceiving a moment can bring a halt to habitual action, opening a space for slantwise movements through the shock of the unexpected. Each small essay in this lexicon is meant to do just this, drawing from anthropology, literary studies, artistic practice, and other humanistic endeavors to open up the range of possible action by contributing some other concrete way of seeing the present. Each entry proposes a different way of conceiving this Earth from some grounded place, always in a manner that aims to provoke a different imagination of the Anthropocene as a whole.

The Anthropocene is a world-engulfing concept, drawing every thing and being imaginable into its purview, both in terms of geographic scale and temporal duration. Pronouncing an epoch in our own name may seem the ultimate act of apex species self-aggrandizement, a picture of the world as dominated by ourselves. Can we learn new ways of being in the face of this challenge, approaching the transmogrification of the ecosphere in a spirit of experimentation rather than catastrophic risk and existential dismay? This lexicon is meant as a site to imagine and explore what human beings can do differently with this time, and with its sense of peril.

Cymene Howe is Associate Professor in the Department of Anthropology and founding faculty of the Center for Energy and Environmental Research in the Human Sciences (CENHS) at Rice University. She is the author of Intimate Activism (Duke, 2013) and Ecologics: Wind and Power in the Anthropocene (Duke, 2019). Cymene was co-editor for the journal Cultural Anthropology and the Johns Hopkins Guide to Social Theory, and she co-hosts the weekly Cultures of Energy podcast.

Anand Pandian is Associate Professor in the Department of Anthropology at Johns Hopkins University. He is author of Reel World: An Anthropology of Creation (Duke, 2015) and Crooked Stalks: Cultivating Virtue in South India (Duke, 2009), among other book, as well as the co-editor of Race, Nature and the Politics of Difference (Duke, 2003) and Crumpled Paper Boat (Duke, 2017).

8 thoughts on “Anthropocene Unseen: A Lexicon”