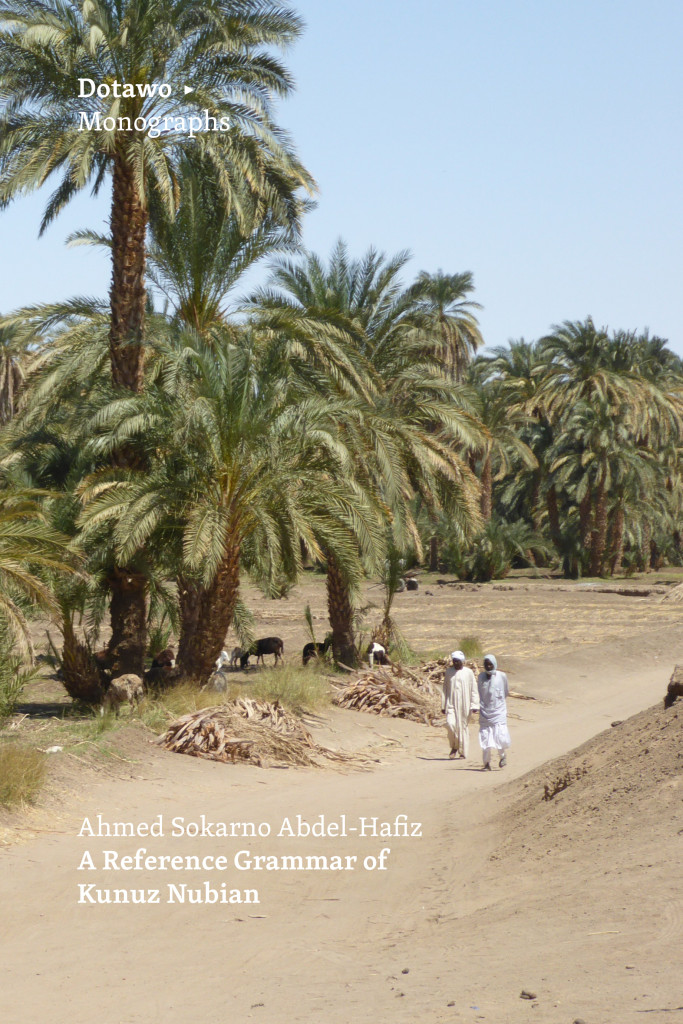 This is the first systematic and clearly structured description of Kunuz Nubian grammar, written by a native speaker of the language. After many years of waiting, this publication presents a mile stone in the study of Nubian languages and of interest to anyone interested in African linguistics.

A Reference Grammar of Kunuz Nubian is a dissertation by Ahmed Sokarno Abdel-Hafiz, completed in 1988 at SUNY, Buffalo, which has remained unpublished for nearly thirty years. Already an indispensable standard work in Nubian linguistics, owing to its wide and unofficial circulation, it tackles the phonetics, phonology, morphology, and syntax of Kunuz Nubian, a Nile Nubian language spoken in Egypt. It remains the only systematic overview of this language, whereas the closely related Dongolawi–Andaandi, spoken in the Sudan, has been described in Armbruster’s Dongolese: A Grammar (1960). This new edition, prepared in the context of the Dotawo: Monographs series, will give this work of scholarship its well-deserved and long overdue published form.

A Reference Grammar of Kunuz Nubian includes a new preface by the author, as well as an appendix with several essays on topics in Kunuz Nubian linguistics, including question formation and benefactives.

Ahmed Sokarno Abdel-Hafiz completed his undergraduate studies in Egypt. In 1984, he joined the Department of Linguistics at the State University of New York, Buffalo, where he obtained an M.A. (1985) and a Ph.D. (1988). After returning to Egypt, he was appointed a lecturer at the Department of English, Assuite University. In 2002, he became the Dean of Faculty of Arts, Aswan University. Nowadays, Abdel-Hafiz is the head of English at Faculty of Arts, Aswan University. He has written several articles on Kunuz Nubian and Arabic Language. Some of these articles have been published in local periodicals, whereas others in international ones such as Languages in Contrast, Babel Journal of Translation, Journal of Arabic and Islamic Studies, and Dotawo: A Journal of Nubian Studies. Also, he has translated two books on Nubian life before the Relocation into Arabic.

5 thoughts on “A Reference Grammar of Kunuz Nubian”