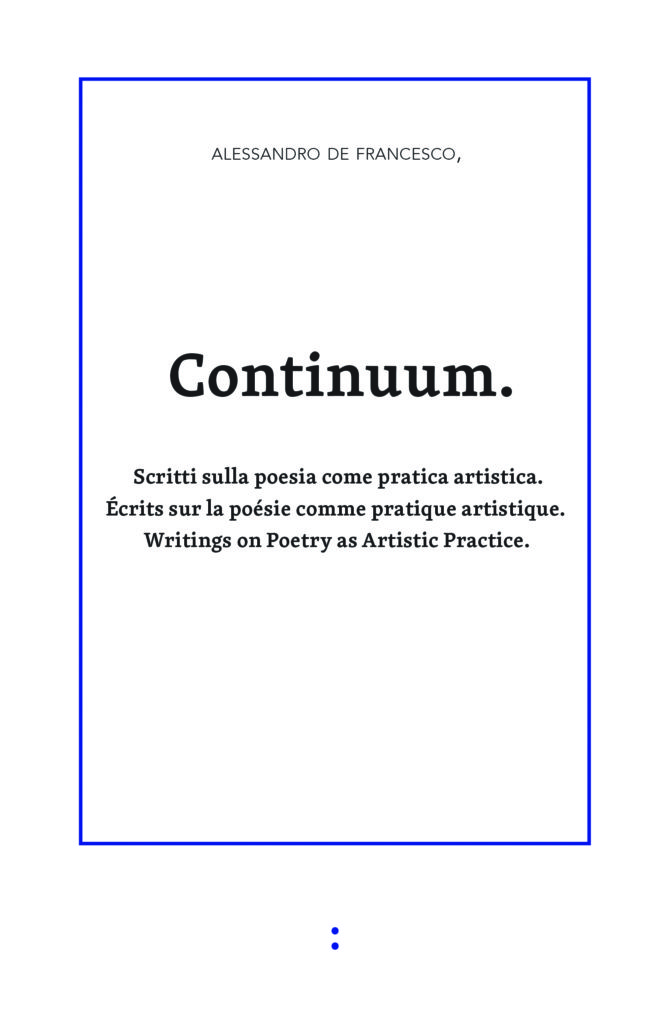 Continuum: Writings on Poetry as Artistic Practice reunites the most part of the essays and articles produced between 2007 and 2015 by poet and artist Alessandro De Francesco. It shows what De Francesco himself affirms at a point in the last text of the book: that an artist can also be a theorist, and that artistic practice and theoretical practice are difficult to distinguish in his work. This book is multilingual: each text was left in the language in which it was written. Therefore, it is predominantly in French, but Italian, English and German are also represented. In spite of poetry being at the center of Alessandro De Francesco’s interests as a thinker, the texts contained in this book are very heterogeneous: poetic statements, essays, scientific articles, lectures, interviews; and yet they also show a deep continuity. Continuum stands for the author’s uninterrupted commitment for poetry, for the numerous connections among the approached themes, and especially for the innovatory theoretical and political positions expressed here, from which all these writings originated.

Alessandro De Francesco is a poet, artist, and essayist based in Brussels and Basel who holds a PhD in Poetics from the University of Paris-Sorbonne and has taught at the European Graduate School, the Sorbonne, the École Normale Supérieure, and elsewhere. In 2015-2016 he was an artistic research fellow at the Research Centre for Visual Poetics at the University of Antwerp. He has read, performed, or exhibited at venues such as the Kelly Writers House at University of Pennsylvania, the Louis Vuitton Foundation, the Centre Pompidou (Paris), the MAMCS in Strasbourg, the Berlin University of the Arts, and the Kunsthalle Basel, among other venues. His recent books include: Continuum: Writings on Poetry as Artistic Practice (Uitgeverij, 2015), La Vision à distance (Èditions MIX, 2015), and Remote Vision: Poetry 1999–2015 (punctum, 2016).