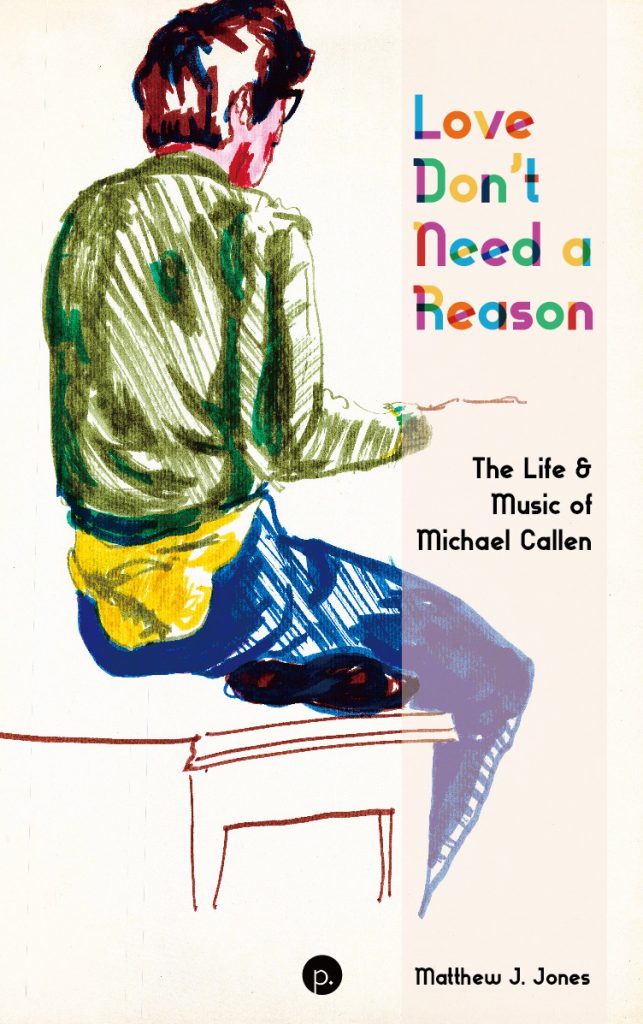 A moving, informative and detailed portrait of Michael Callen through the lens of his music, his fight, and his love. A beautiful work.

~ Sarah Schulman, author of The Gentrification of the Mind: Witness to a Lost Imagination

Michael Callen was an artist who swooned and swanned to be heard, his songs bursting forth to express pleasure and humor and the longing for a more connected life. His insistence on being heard as an activist saved millions of lives, as this biography reminds us. That Callen’s whole story — and particularly the story of the music that inspired so many as Callen and so many others became warriors in the fight to illuminate the costs of HIV-AIDS — has not been told in this way before is an injustice, one that Jones corrects with exactitude, insight and love.

For young people today the horrors of the early years of AIDS are as distant as was World War II for those of us who lived through that time. In Love Don’t Need a Reason Matthew J. Jones brings to life one of the true heroes of the AIDS epidemic, the performer and activist Michael Callen, one of the first people to give voice to the people who were living and dying from HIV. This book is both the biography of a remarkable man and a loving tribute from one generation to another.

~ Dennis Altman, author of AIDS in the Mind of America

As we all struggle with the Corona Virus Pandemic, we need to remember the marginalized community of gay men who suffered through the AIDS/HIV epidemic in the 1980s and 90s. Michael Callen’s voice — his music, poetry, and vocality — helped thousands immeasurably as they faced not support but scorn along with their afflictions. In this moving book, Matthew J. Jones traces the personal and artistic development of a queer kid from the Midwest as he came to terms with his own sexuality, engaged with other activists, and eventually composed “Love Don’t Need a Reason,” which became an anthem for the AIDS movement. We need to remember….

From a stage erected in front of the US Capitol, on April 25, 1993, Michael Callen surveyed the throng: an estimated one million people stretched across the National Mall in the largest public demonstration of queer political solidarity in history. “What a sight,” he told the crowd, his earnest Midwestern twang reverberating through loudspeakers. “You’re a sight for sore eyes. Being gay is the greatest gift I have ever been given, and I don’t care who knows about it.” He then launched into a gorgeous rendition of “Love Don’t Need a Reason,” the AIDS anthem he composed with Marsha Malamet and the late Peter Allen. As Callen finished singing, people stood cheering and flashing the familiar American Sign Language symbol for “I Love You.” For they knew the song’s sentiment rang true for Callen, who had recently announced his retirement from music and activism after a living for more than a decade with what was then called “full-blown AIDS.” After the March on Washington, Callen returned to his recently adopted West Coast home, Los Angeles. In the ensuing months, his health rapidly declined, and on 27 December 1993, Callen died of AIDS-related pulmonary Kaposi’s sarcoma.

Love Don’t Need a Reason focuses on Callen’s most important and lasting legacy: his music. A witness to the overlooked last years of Gay Liberation and a major figure in the early years of the AIDS crisis, Michael Callen chronicled these experiences in song. A community organizer, activist, author, and architect of the AIDS self-empowerment movement, he literally changed the way we have sex in an epidemic when he co-authored one of the first safe-sex guides in 1983. A gifted singer, songwriter, and performer, he also made gay music for gay people and used music to educate and empower people with AIDS. Listening again to his music allows us to hear the shifting dynamics of American families, changing notions of masculinity, gay migration to urban areas, the sexual politics of Gay Liberation, and HIV/AIDS activism. Using extensive archival materials and newly-conducted oral history interviews with Callen’s friends, family, and fellow musicians, Matthew J. Jones reintroduces Callen to the history of LGBTQIA+ music and places Callen’s music at the center of his important activist work.

Matthew J. Jones is a musicologist and cultural critic. A first-generation college student from rural northern Georgia, he received a doctorate in Critical and Comparative Studies from The University of Virginia in 2014. His work explores the relationships between LGBTQIA+ culture, music, media, and activism and has appeared in The Journal of the Society for American Music, The Journal of Popular Music Studies, Women and Music, and the Oxford Handbook of Music and Queerness. In 2017, he won the ASCAP Deems Taylor/ Virgil Thompson prize for concert music criticism for his essay, “Enough of Being Basely Tearful: ‘Glitter and Be Gay’ and the Camp Politics of Queer Resistance.” He is currently at work on a book titled Popular Music-Making During the AIDS Crisis: 1981–1996 (Routledge, forthcoming).

13 thoughts on “Love Don’t Need a Reason: The Life & Music of Michael Callen”