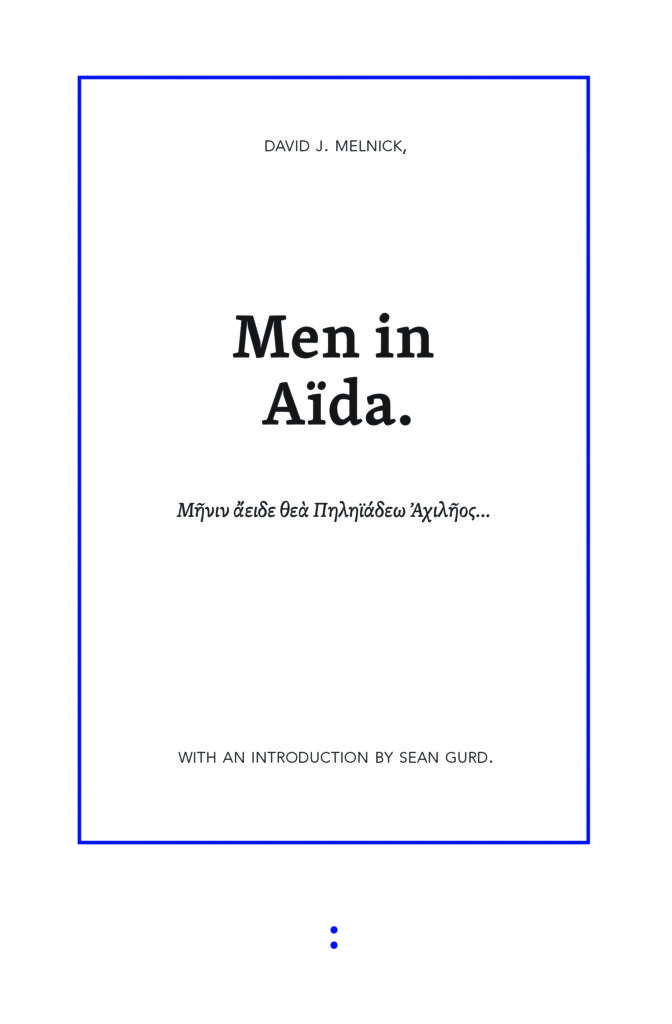 “The labor of more than 20 years, Men in Aïda filters the sound of Homer’s Iliad through the words and phraseology of English. Far more than an exercise in homophonic translation, David J. Melnick’s epoch-marking poem packs thousands of years of linguistic history into three riotous books.”

David J. Melnick published the first book of Men in Aida, a homophonic, but also homoeroticized translation of Homer’s epic Iliad, in December 1983 in an edition of 450 at Tuumba Press. After appearing in many guises and fragments, Book Two was published online in 2002 as part of the Eclipse Archive. Book Three appears for the first time in the present publication, which brings together all three books of one of the most important American avant-garde poems.

David J. Melnick was born in Illinois in 1938 and was raised in Los Angeles. By the age of 7 he had invented a private language, and at 13 he constructed a semi-private one with a friend. He was educated at the University of Chicago and the University of California at Berkeley, and now lives in San Francisco. His first book, Eclogs, containing poems written in the 1960s, was published in 1972 (Ithaca House). Pcoet, written in 1972, was published in 1975 (g.a.w.k.). Men in Aida, Book One (Tuumba, 1983) is the first book of a projected poem based on Homer’s Iliad. This poet’s politics are left, his sexual orientation gay, his family Jewish. He has wandered much, e.g., to France, Greece and Spain (whence his mother’s ancestors emigrated in 1492). As of this writing, he has never held a job longer than a year-and-a-half at a stretch. He is short, fat, and resembles Modeste Moussorgsky in face and Gertrude Stein in body type and posture. Melnick later published A Pin's Fee (1988), which, according to Ron Silliman, "could be read as a journal of the plague years, San Francisco during the first full brunt of the AIDS pandemic."