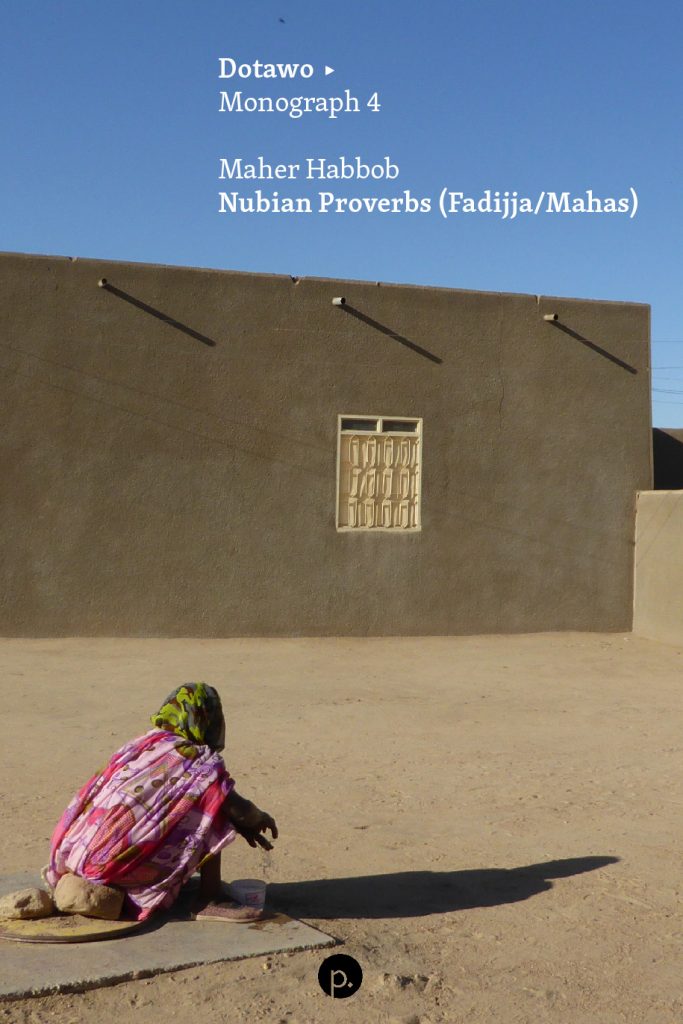 In the 1995/96 academic year, twenty-five Egyptian Nubian students of the Faculty of Social Work in Aswan were recruited by Dr. Muddathir Salim to complete a brief Nubian ethnological survey, largely restricted to the area of New Nubia, over a period of several months. They documented Egyptian Nubian culture and heritage, among them proverbs, tales, lullabies, marriage customs, and moulid and mourning songs, as well as models of Nubian clothes, jewelry, and houses.

This research has culminated in Maher Habbob’s Nubian Proverbs, which presents the fruits of decades of collecting proverbs from his native Nubian region in Fadijja (Nobiin). The five hundred proverbs gathered in this volume give a vivid picture of the Nubian imagination and represent a priceless archive of cultural heritage threatened by ongoing assimilation and cultural genocide.

The proverbs are presented in Nubian script, accompanied by a transliteration in Roman script, an a literal translation and paraphrase in English.

Maher Habbob is a Fadijja (Nubian) scholar working in Egypt on Nubian heritage, folklore, and language. He is author of Mo’jam al-amthal el-noubeya [A Dictionary of Nubian Proverbs] (2014) and collaborated on the research for Thayer Scudder's Aswan High Dam Resettlement of Egyptian Nubians (Springer, 2016). His research has appeared in Akhbar al-adab, Al-Thaqafa al-Gadida, Amkenah Magazine, and Dotawo. He lives in Aswan, where he works as a tour guide.

One thought on “Nubian Proverbs (Fadijja/Mahas)”