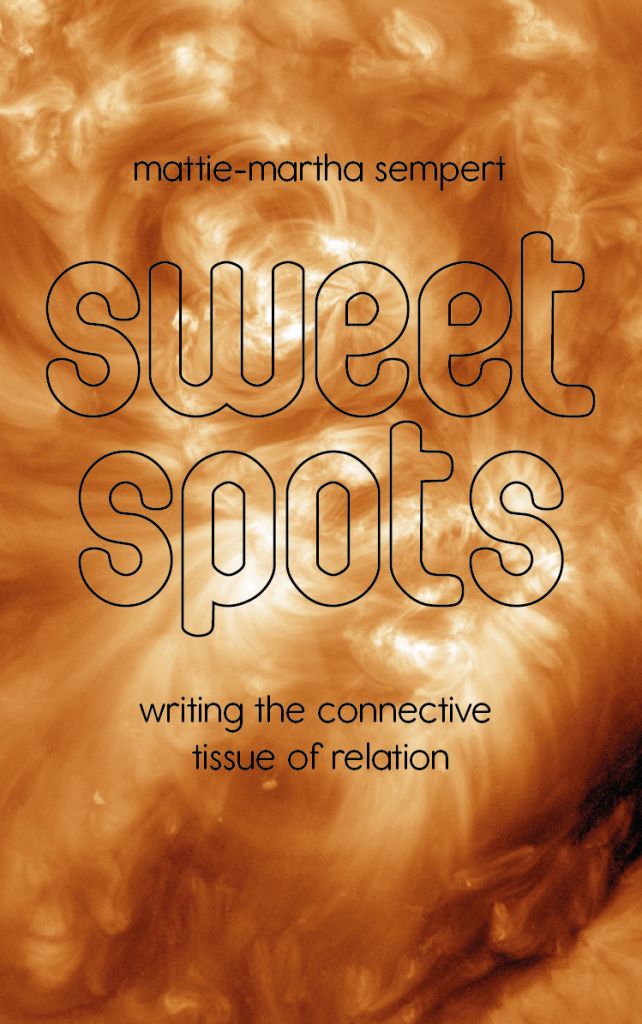 Sweet Spots is beautifully written and original. I’m very excited that the feeling-thinking practice of the Sempert School of Radical Acupuncture (and ‘acu-writing’), with the publication of Sweet Spots, will soon be more fully available to the world.

Sweet Spots is a brilliant meditation on practice that will find receptive readers in and out of the university.

Sempert’s book successfully accomplishes what it sets out to do: explain and complicate dualisms and binaries. Here, she demonstrates, through writing about her practice of stitching together body and mind through, as she connects tension in the body to tension in the mind, literal stitching together of both. Immanence is clearly identified as body-global. It’s a gift to the reading-world that this book has arrived.

Sweet Spots thinks transversally across language and body, and between text and tissue. This assemblage of essays collectively proposes that words—that is, language that lands as written text—are more-than-human material. And, these materials, composed of forces and flows and tendencies, are capable of generating text-flesh that grows into a thinking in the making. The practice of acupuncture—and its relational thinking—often makes its presence felt to twirl the text-tissue of the bodying essays. Ficto-critical thinking is threaded throughout to activate concepts from process philosophy and use the work of other thinkers (William James, Félix Guattari and Gilles Deleuze, Baruch Spinoza, and Virginia Woolf, to name a few) to forge imaginative connections.

Entangled in the text-tissue are an assortment of entities, such as bickering body parts, quivering jellyfish, heart pacemaker cells, a narwhal tooth, Taoist parables, always with ubiquitous, stretchy connective tissue — from gooey interstitial fluid to thick planes of fascia — ever present to ensure that the essaying bodies become, what Alfred North Whitehead calls the one-which-includes-the-many-includes-the-one.

The essaying bodies orient towards the sweetest sweet spot which is found, not in the center, but slightly askew, felt in the reverbing more-than that carries their potential. Crucially, this produces a shift in perspective away from self-enclosed bodies and experts toward a care for the connective tissue of relation.

Mattie-Martha Sempert is a practicing acupuncturist and creative writer and has a creative practice-led PhD from Royal Melbourne Institute of Technology. Her work has appeared in New Writing, Writing in Practice, Axon: Creative Exploration, The Lantern, Unlikely, and Immediation. Mattie is loosely planted in the bushland hills outside of Melbourne, where she attempts to make a daily habit living in William James’s World of Pure Experience.

4 thoughts on “Sweet Spots: Writing the Connective Tissue of Relation”