The first thing José Muñoz said to me: You’re a poet? That’s precious. In a queer theory seminar, I had fallen in love with his book, Cruising Utopia, and professed as much on Facebook. We started corresponding about the many things we both loved: Frank O’Hara, chiefly, but also Andy Warhol, the boys from One Direction, and Whitney Houston.

To be clear: we rarely talked about ourselves, so I know little about José. But then again, we talked about the things we loved and through this, I do know him, in a sense. What’s your favorite O’Hara, I emailed him this summer, expecting, of course, José to say, “Having a Coke With You,” the poem that he beautifully used to explain how queerness is always the hope for that which may yet come. But he surprised me: “Mayakovsky.” I mean, how can you not fawn over lines like, “Now I am quietly waiting for / the catastrophe of my personality / to seem beautiful again, / and interesting, and modern.”

In the vein of O’Hara writing about Lana Turner, I had written a series of poems about Britney Spears. All these tragic divas, José wrote to me, you homos are obsessed. He meant this as a compliment; we are both sarcastic at every chance; we both love camp as an aesthetic. I don’t know what tense to use here, love or loved. But of course, José still speaks — queerness is primarily about futurity and hope. That is to say that queerness is always in the horizon. Like in O’Hara’s poem — I have been to lots of parties / and acted perfectly disgraceful / but I never actually collapsed / oh Lana Turner we love you get up. Here, the flamboyant actress always has the potential to get up again, in a queer time that is yet to come. Oh José.

The day José died, I was working in the lounge of our English department. My mentor, and more importantly, José’s friend, Robert McRuer came in and told me on his way to a meeting. I walked down to my own office, stopping to knock on Holly Dugan’s door. I cannot — words fail the poet, too — tell you what it felt like to stand in her doorway and think about this mourning together. Holly and I both adore José, though neither of us knows him well. The mourning of his actual friends on Facebook overshadowed our own feelings, we thought, and rightfully so. Holly and I hugged. She said, But then again, it shows the power of books, what we’re feeling. We didn’t say much. We felt, a cliché I so usually backspace from every poem or essay. I’m a twenty-something hipster, for Christ’s sake; one who is not keen on public mourning. But we felt and I think of José and the horizon —

The not-quite-conscious is the realm of potentiality that must be called on, and insisted on, if we are ever to look beyond the pragmatic sphere of the here and now, the hollow nature of the present.

In our last email exchange, José said he hated Britney but since we both loved Whitney, we should talk about her. Do you remember when “How Will I Know” started playing on the radio? he asked. Well, I was barely one in 1985. So only in my queer future do I remember, I answered. Don’t be a little shit :-), he replied.

We finally met in person at the American Studies Association this November. We didn’t have long, just a passing ten minutes between panels where we sat and had a Coke in the lobby. José loved that the conference was at the Washington Hilton, where Ronald Regan had been shot in 1981. Of course I don’t wish death on anyone, José said, but can you imagine? But then again, the first Bush presidency was total shit, too. I laughed. Now show me this Frank O’Hara tattoo.

I unbuttoned the top of my shirt to reveal the typewriter inked there. José tapped the space bar with his pointer finger. Started singing, Tumble outta bed and stumble to the kitchen. Pour myself a cup of ambition. We laughed. Of course we both love Dolly, I said, I have to get back to the bookfair. It would be less than two weeks until José would be dead. He gave me a hug, Keep me posted on the dissertation, as he kissed my cheek, and shave, why don’t you. 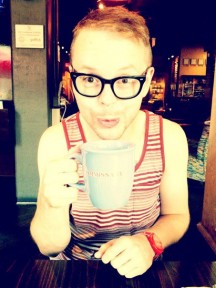 D. Gilson is a queer writer from the Ozark Mountains. His poetry, essays, and scholarship explore the relationships between popular culture, sex, and literature. Catch & Release, his first chapbook, won the 2011 Robin Becker Prize from Seven Kitchens, and his second, Brit Lit, is now available from Sibling Rivalry. His work has appeared in The Indiana Review, The Rumpus, Beloit Poetry Journal, Los Angeles Review, and Assaracus. A graduate of the MFA program at Chatham University, D. is currently a PhD student in American Literature & Culture at The George Washington University. He is the co-author, with Will Stockton, of CRUSH, forthcoming from punctum books in April 2014.