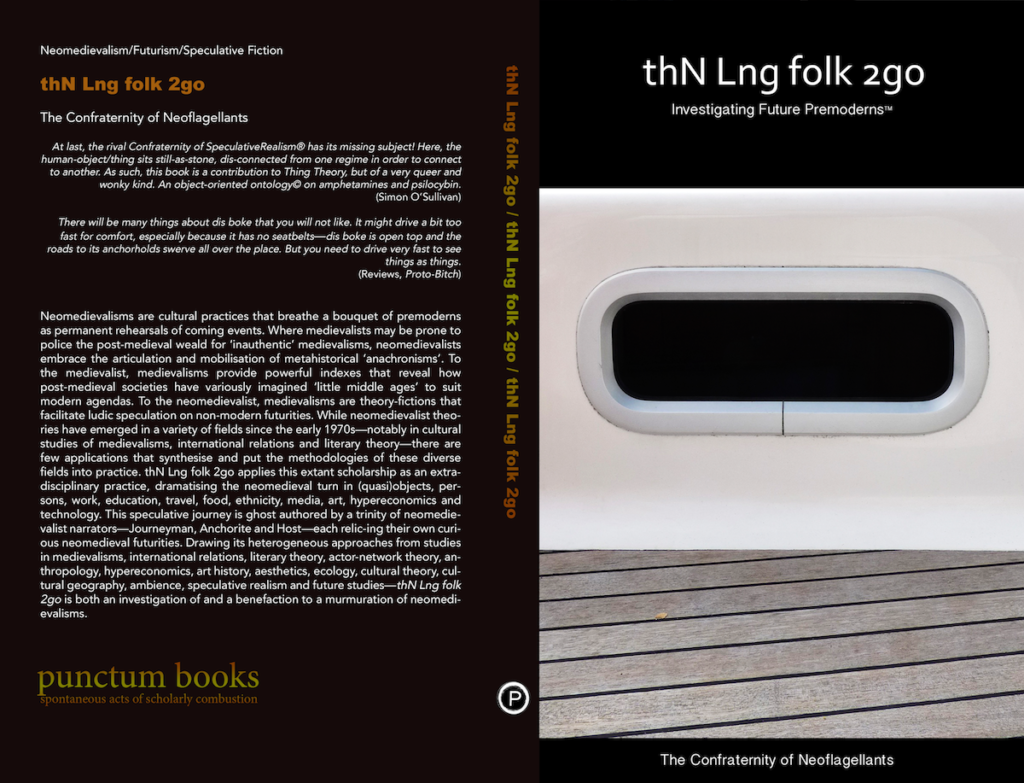 At last, the rival Confraternity of SpeculativeRealism® has its missing subject! Here, the human-object/thing sits still-as-stone, dis-connected from one regime in order to connect to another. As such, this book is a contribution to Thing Theory, but of a very queer and wonky kind. An object-oriented ontology© on amphetamines and psilocybin. (Simon O’Sullivan, “Preface: The Seven Courts of the Mall (or, We Have Always Been Medieval”)

There will be many things about this guide that you will not like. It might drive a bit too fast for comfort, especially because it has no seatbelts—the Journeyman’s Guide is open top and the roads to its anchorholds swerve all over the place. But you need to drive very fast to see things as things. (Reviews, Proto-Bitch, Portland, OR)

Take your tour of the bittersweet anchorholds discussed in this guide—if it’s summer, bring a plastic bag and a bathing suit. Reinvigorate your sense of wonder at the bizarre hypereconomy of sensual relations and aesthetic transfigurations manifest throughout the middle kingdom of the great subject/object divide. Consider the anchorite who heroically straddles the ontological dyke that we Journeymen must constantly leap—never settling on one side or the other. Now try it yourself! When your legs start to tremble, your britches tear asunder, and your groin aches to high heaven, wonder at the anchorite who, with mighty yoga skills and limbs of steel, adopts this position forever with the ascetic grace of a lobster clinging steadfastly to the rim of a steaming pot. (from “The Journeyman’s Guide to Anchoritism“)

In the jousting field of Parc Mont Royale, near Chemin Olmsted, Montréal, Quebec H2W 1S8, at 19:00 EST Sergeant-at-Arms (Norman Hogg) will download a PDF of the book from https://punctumbooks.com/punctum/titles/thn-lng-folk/ (CAN$0) onto his Android cellphone and drink a toast from the Horton’s cup.

At Cabaret Voltaire, Spiegelgasse 1, 8001 Zürich, Switzerland, Keeper of the Wardrobe (Neil Mulholland) will launch the print copy of the book (€15) at 23:00 CET. The first advanced print copy will be flagellated, then burned, its ashes interred in the bin outside Cabaret Voltaire’s gift shop.

In Cincinnati, Ohio in a bungalow on Bishop Street in the Clifton neighborhood, 45220, at 7:00 pm EST, the volume’s esteemed editor (Eileen Joy) will retreat into her basement hub-anchorhold and break down the division between subject and object, thereby unleashing a swarm of inhuman champagne-swilling actants.

If asked to provide a comprehensive summary of this book, I would have to fake a reason to suddenly be needed in the next room, two countries over. There IS no way to adequately [or neatly] summarize this book, but suffice to say, similar to Reza Negarestani’s theory-novel Cyclonopedia: Complicity With Anonymous Materials (re.press, 2008), thN Lng folk 2go is a mixed-genre speculative theory-novel that comprises: faux-yet-real International Relations scholarship; a swarm-authored “journeyman’s guide” to contemporary anchorholds (“built on contributions from dudes in the local anti- and post-humanist communities”); a post-future archival narrative excavation of 5 saga-podcasts that detail a lost history of a futurist 400-year American Commune (“L’Amérique Souterraine”) that also includes a duelling marginal commentary; a faux-yet-real scholarly appraisal of neomedieval art in the early 21st century; and a faux-biography of the hypereconomist-game developer-entrepreneur Alexandr Petrovsky who apprenticed at VALVe and brought content and brand curation to new levels, creating technologies for enchantment, gaming cuboids, and a new company Brandeum, part of whose mission statement reads, “Thorns whisper perfidious penance as bats unleash sanguine fangs. Foolish mortals secrete perfidious abattoirs as oblivion engulfs the spectral requiem. Darkness ascends silver deception while pyres collapse from Elysian arterial spray. Prayers unleash nocturnal torment and entangle our bloody souls.”

Although this will do no real justice to how varied, rich, and downrightly deliciously and psychedelically mind-bending this futurist “theory-fiction” is, suffice to say that, on one important level [and hence, all of the particular medievalists who appear in this book] the volume performs a scathing critique of the post-nation, hypereconomic, neomedievalist breakaway present, albeit from a fictional future looking back on a present that is part-historically real and part-fabulated — all inflected, as well, with a super-concentrated dose of Object-Oriented Ontology and Speculative Realism. What is astounding about this book is that — unlike many commentators in think tanks and policy institutes, the contemporary press, political figures, and the like, who throw around the terms “medieval” and “neomedieval” in really historically irresponsible ways — it was written by 2 artists with backgrounds in visual culture studies, art-practice, and art history who are DEEPLY well-read in medieval studies (and studies in medievalism), and also in International Relations theory, literary theory, actor-network theory, anthropology, hypereconomics, art history, aesthetics, ecology, cultural theory, cultural geography, and speculative realism. In other words, this is a work of pseudo-fiction that packs a stinging wallop of a theoretical punch relative to the world we live in today and its many still-medieval valences. It is also one hell of a rollicking rollercoaster ride of a read.

So, please, retreat to your anchorhold and download the open-access e-book and/or purchase the affordable (and handsome!) print edition HERE (PLEASE ALSO consider making a donation when downloading as a way of saying “Vive la Open-Acess!”).