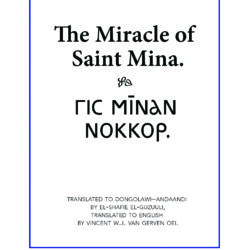 The Miracle of Saint Mina is one of the core texts in the small corpus of texts written in Old Nubian, a Nilo-Saharan language spoken between the third and fourth cataract of the Nile river until about the fifteenth century, and written in an adaptation of the Coptic script. It is one of the oldest written[…]