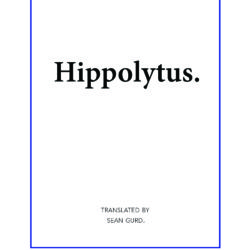 Euripides wrote two plays called Hippolytus. In this, the second, he dramatized the tragic failure of perfection. This translation comes in two forms; the first presents a simulacrum of the text as it might have appeared in unprocessed form to a reader sometime shortly after Euripides’ death. The second processes the drama into the reduced but[…]