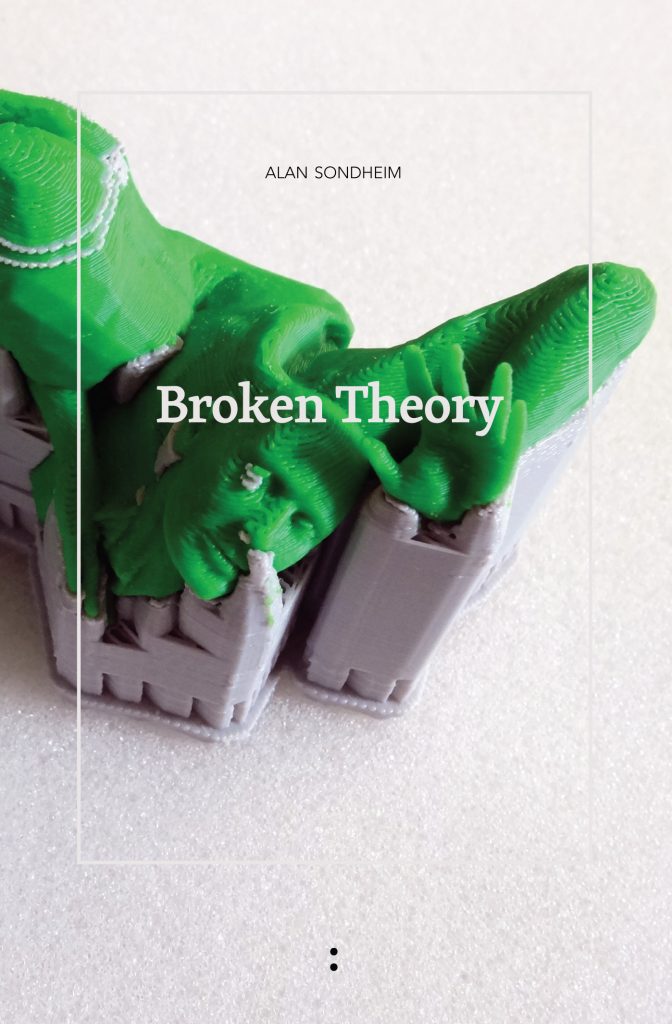 Broken Theory is a jettisoned collection of fragmentary writing, collected and collaged by new media artist, writer, musician, and theorist Alan Sondheim. Folding theoretical musings, text experiments, and personal confessions into a single textual flow, it examines the somatic foundations of philosophical theory and theorizing, discussing their relationships to the writer and body, and to the phenomenology of failure and fragility of philosophy’s production. Writing remains writing, undercuts and corrects itself, is always superseded, always produced within an untoward and bespoke silo – not as an inconceivable last word, but instead a broken contribution to philosophical thinking. The book is based on fragmentation and collapse, displacing annihilation and wandering towards a form of “roiling” within which the text teeters on the verge of disintegration. In other words, the writing develops momentary scaffoldings – writing shored up by the very mechanisms that threaten its disappearance.

Broken Theory is prefaced by a text from Maria Damon and followed by an extensive interview with art historian Ryan Whyte.

Alan Sondheim is a new media artist, theorist, and writer concerned with the phenomenology of the virtual. He has collaborated with motion capture and virtual environment labs. His work is concerned with the inhabitation of the body in the virtual; with the textuality of the body; with the problematic of mixed reality and codework. His writing is known for its "somatic grit" and skeletal codes that partially appear within and determine the surface. This style embeds interferences among syntax, semantics, and formal systems. The textual body, body of text and writer, are deeply entangled. His current work is based on the psychogeography of real and virtual worlds and their modeling. Most recently he has focused on "semantic ghosting" – the body behind the virtual/symbolic body – and modes of viral dispersion in a series of videos and texts. Sondheim was born in Wilkes-Barre, Pennsylvania, attended Brown University, and has exhibited, taught, and lectured at a number of venues in the United States and abroad.