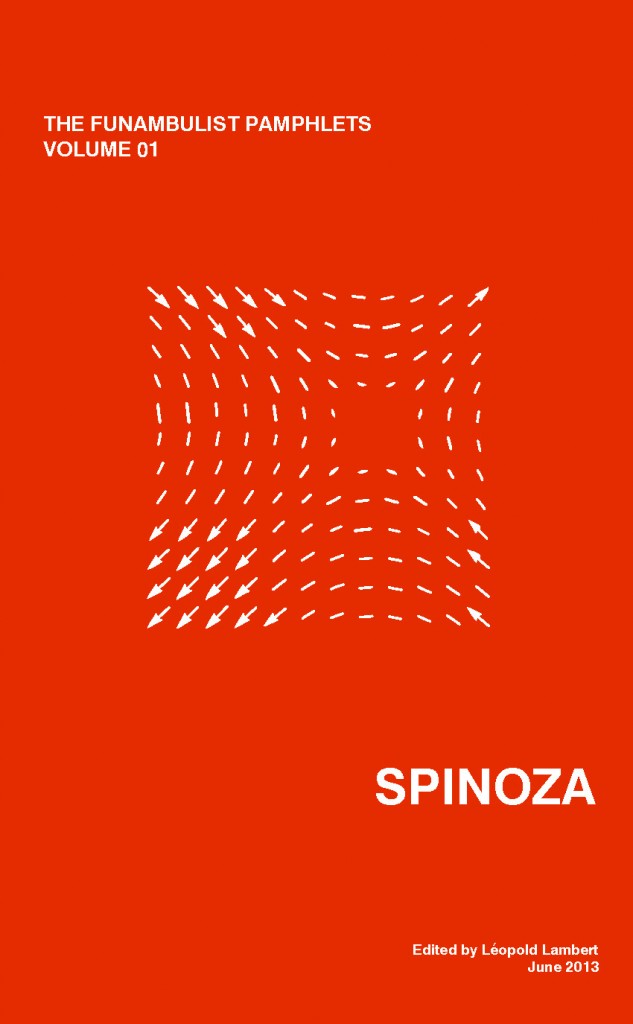 Although The Gay Science is a book by Friedrich Nietzsche, Baruch Spinoza could have been the author of a book by the same title. The materialist joy that he describes in his Ethics is an inspiration to all creative disciplines.

The blog The Funambulist: Architectural Narratives, a daily architectural platform written and edited by Léopold Lambert, finds its name in the consideration for architecture’s representative medium, the line, and its philosophical and political power when it materializes and subjectivizes bodies. If the white page represents a given milieu — a desert for example — and one comes to trace a line on it, (s)he will virtually split this same milieu into two distinct impermeable parts through its embodiment, the wall. The Funambulist, also known as a tightrope walker, is the character who, somehow, subverts this power by walking on the line.

Volume 01_Spinoza includes: The Marxian Reading of Capitalism Through a Spinozist Conceptology — Spinozist Determinism, or How Caesar Could Not Have Not Crossed the Rubicon — Power (Potentia) vs. Power (Potestas): The Story of a Joyful Typhoon — The World of Affects, or Why Adam Got Poisoned by the Apple — The Spinozist Scream: What Can a Body Do? — Applied Spinozism: The Body in Kurosawa’s Cinema — Applied Spinozism: Architectures of the Sky vs. Architectures of the Earth — Architectures of Joy: A Spinozist Reading of Parent+Virilio & Arakawa+Gins’s Architecture — Architecture of the Conatus: “Tentative Constructing Towards a Holding in Place” — The Body as a Material Assemblage in Japanese Martial Arts & Dance as Seen by Basile Doganis — Deleuze’s Wave about Spinoza — A Sunflower Seed Lost in a Wall is Capable of Blowing Out that Wall — Descartes vs. Spinoza: A Personal Reading of Tarp Not Nature — The Weight of the Body Falling — Spinozist Collision — The Weight of the Body Dancing — Spinozist Gravity: The Real Difference between the Old and New Star Wars — Spike Lee’s Dolly Shot: The Inexorability of Immanence.

Léopold Lambert (born in 1985) is a French architect who successively lived in Paris, Hong Kong, and Mumbai and currently resides in New York. His approach to architecture consists in a delicate articulation between theoretical research and a frank enthusiasm for design. Such an articulation has been explicated in his book Weaponized Architecture: The Impossibility of Innocence (dpr-barcelona, 2012), which attempts to examine the characteristics that make architecture an inherent political weapon through global research as well as an architectural project specific to the Israeli civil and military occupation of the West Bank. He is also the author of the graphic novel, Lost in the Line. He finds his architectural inspiration from films, novels, and political philosophy books, rather than in architectural theory texts. He is currently collaborating with Madeline Gins for her Reversible Destiny Foundation (created with the late Arakawa) whose philosophical and architectural work is highly influential upon the role of architecture in relation to the human body. He is also currently learning Japanese and finds a lot of joy in writing Kanji characters!

One thought on “The Funambulist Pamphlets 1: Spinoza”