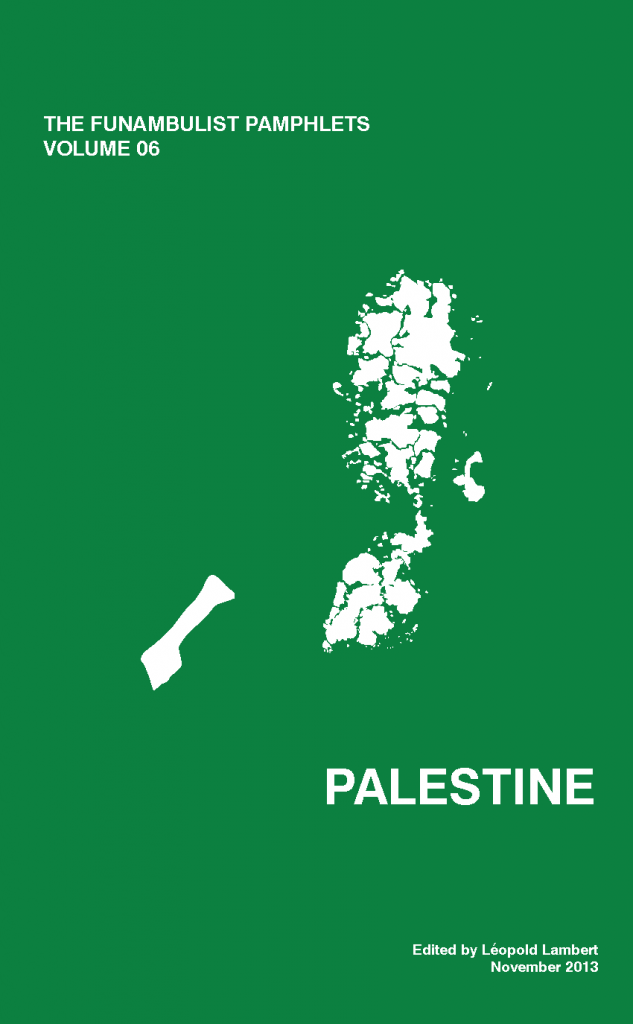 … a deep examination of the systematic aspects of Israel’s colonial strategy constitutes a necessary production of knowledge that can inform the various means of their deactivation. The cartography (literal and figurative) that results from such an examination expresses the politics of space that are at work in this region.

Volume 06_Palestine includes: Introduction: Cartography of a Colonial Politics of Space — The Palestinian Archipelago: A Metaphorical Cartography  of the Occupied Territories — For a More Embodied Vision of the Occupation: The Israeli Settlements in the West Bank Through Palestinian Eyes — Architectural Stockholm Syndrome — The Route 443, a Symptomatic Example of the Apartheid Apparatus in the West Bank — Road Link between Gaza and the West Bank: A Sovereignty Contained in a Line — The Ordinary Violence of the Colonial Apparatuses in the West Bank — The Right to the Ruin: Civilization Absence in the Post-Nakba Landscapes — Sympathy with the Obstacle in the Gaza Strip — War in the Manhattan Strip — Political Geography of the Gaza Strip: A Territory of Experiments for the State of Israel — Representation of Otherness for a Gaza Kid — The Policies of the “Lesser Evil” — Palestine: What the International Legislation Says — Law as a Colonial Weapon — The Reasons for Disobeying a Law — The Palestinian Legal Right of Return — Manual of Return — 2037 (by Raja Shehadeh) — Running as Political Resistance — Idealism & Imagination — Are we Questioning the Essence of Problems? — An Epistolary Conversation with R. Debatty — An Epistolary Conversation with A. Barclay and D. Qaddumi