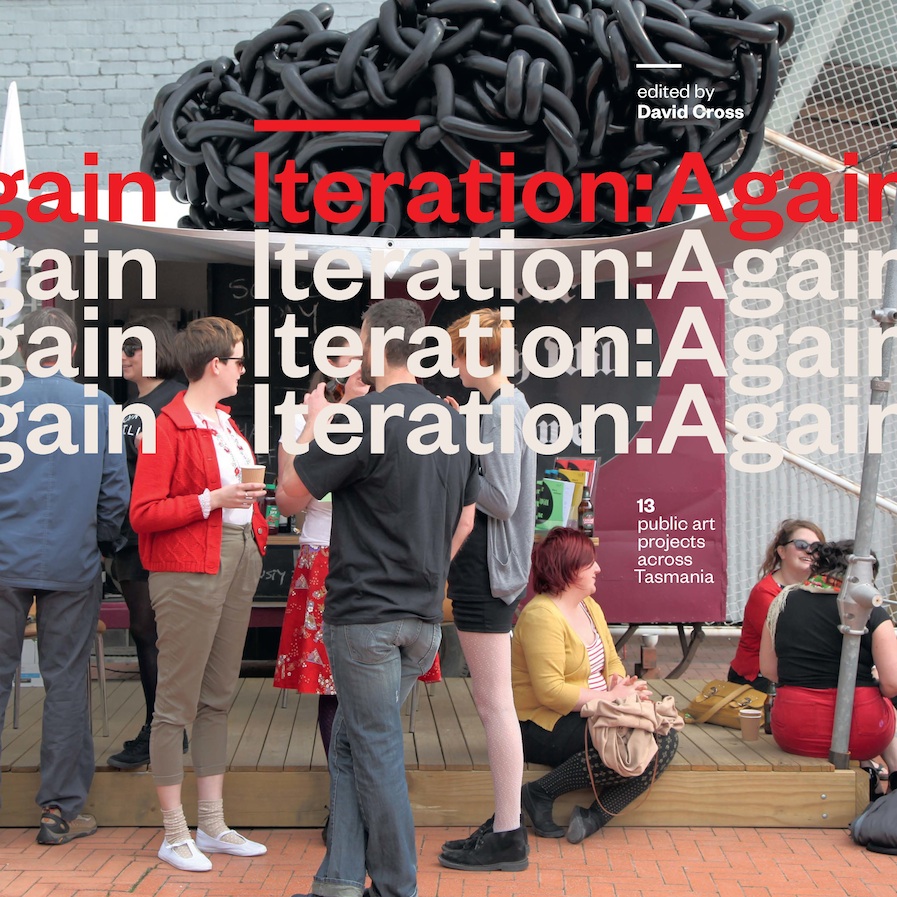 The richness of Iteration:Again lay in the range of publics proposed by the artists’ projects. Taking very different forms, projects held common interests in contesting normative forms of governance, institutional structures, commercial values, and the private control of knowledge.

Iteration:Again documents and reflects upon a series of thirteen temporary public art commissions by twenty-one Australian and international artists that took place across Tasmania from September 18 to October 15, 2011. Produced by Contemporary Art Spaces Tasmania and David Cross, in conjunction with seven partner curators, Iteration:Again presents a compelling array of temporary artworks in largely unexpected places throughout Tasmania. Working to transform our experience of place for a moment in time, each commission seeks to address how temporary interventions or responses by artists to public sites, environments and buildings can serve to open up new ways of understanding Tasmania as a place with very complex cultural, social and spatial resonances.

How it might be possible to introduce transformative elements that challenge the notion of a fixed or definitive artwork grounded in one location? By asking the artists to make four different chapters or ‘iterations’ over the course of a four-week period, David Cross challenged each practitioner to think through how change or processes of transition may function to make the art experience an unstable and contingent one. This idea of incorporating change into the work highlights a growing interest by artists in emphasizing art as a potentially theatrical or even fictive medium with the audience experiencing different moments or stages of encounter over a number of weeks. The idea provided for the possibility of narrative sequences, formal investigations, or temporal shifts that saw key additions or subtractions over time. Each commission sought to recast our understanding of public artwork from a discrete event or viewing experience, to a suite of experiences.

The book includes sections on each project by the artists, including Ruben Santiago, Paul O’Neill, Maddie Leach and Toby Huddlestone, with a curatorial statement introducing the work and a commissioned response by thirteen Australian and international writers. It also features two major essays on key issues in temporary public art, including a curatorial essay by Cross and an essay on post-studio practice by noted public art scholar and curator Marco Marcon.

David Cross is an artist, writer and curator based in Wellington, New Zealand. With Claire Doherty he developed One Day Sculpture a series of 20 temporary commissions by national and international artists across New Zealand in 2008/9, including Thomas Hirshhorn, Superflex, Bik Van der Pol, and Roman Ondak. The book of the series was published by Kerber in 2009. He has exhibited at a range of venues in New Zealand, Australia and Eastern Europe, including Perspecta 99 in Sydney and ACCA in Melbourne. He has also performed in international live art festivals in Poland and Croatia and the Czech Republic. His writing has been published in numerous journals and magazines including Art and Text, World Art, AAANZ Journal and Photofile. He is Associate Professor in Fine Arts at Massey University, New Zealand.