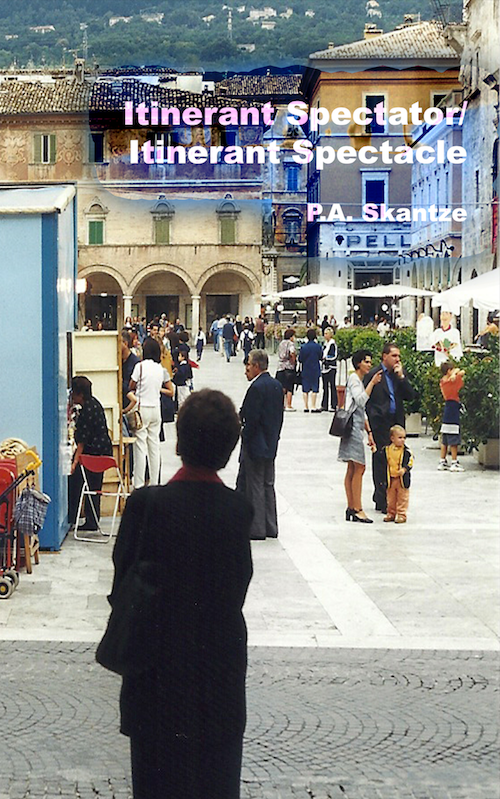 Reading the pages of P. A. Skantze’s wonderful new book Itinerant Spectator/Itinerant Spectacle, I cannot imagine having a better performance companion or a better model for how to watch theatre. Skantze delivers nothing short of the deepest and most beautiful recitation on, and poetic manifesto about, learning to spectate.

IS/IS theorizes spectating as a practice that extends beyond the theatre, as a practice of writing as recollecting (and recollecting as writing) at the center of what has been called “criticism.” The book grounds spectatorship in the subjective, embodied, differenced practice of spectating not from a fixed location or standpoint but from a ground that constantly shifts, that is, from the ground of the roving positionalities of the “itinerate spectator.” Following Walter Benjamin, for example, Skantze importantly adopts the privileges of the flaneur as a feminist and rather queer project, one that refuses to be tied to the minor position, to that of the impossible “flaneuse.”

The  methodology of the book takes inspiration from the writings of W.G. Sebald and his employment of something Skantze describes as “a staging of memory,” a way to offer the reader an example of how memory works in the midst of a description of a particular recollection. This construction invites the reader/participant to ‘discover,’ to ‘remember’ alongside the writer. Further, this methodology invites the reader to incorporate her/his own ideas and memories of the practice of spectating through an openness in the language of remembering and description.

Individual sections of the book demonstrate spectating as itinerant ‘on the job training’ in various modes of reception. Topics include: the idea of reparation in performance about nations, the past and injustice; the power of sound and the intricacies of seeing/hearing performance in many languages; the architectural information absorbed by the spectator and its role in fashioning story; the shifts made in spectating at festivals between theatre and dance; and the political consequences and traps of mobility and immobility.

P.A. Skantze is a director, writer and spectator of theatre and performance based in London and Italy. She works internationally with her performance company Four Second Decay. Her performance projects include All that Fell, an experiment in physical radio, Audible Montage or Eurydice’s Footsteps, and Stacks. Author of Stillness in Motion in the Seventeenth-Century Theatre, Skantze also writes on sound and the sonic arts, practice as research as a method of considering 17th-century theatre, questions of reception and representation of race and of gender, the practice of spectating across nations, across centuries and across media. Her most recent research project explores the epistemology of practice as research. Currently she is Reader in Performance Practices in the Department of Drama, Theatre and Performance at Roehampton University.