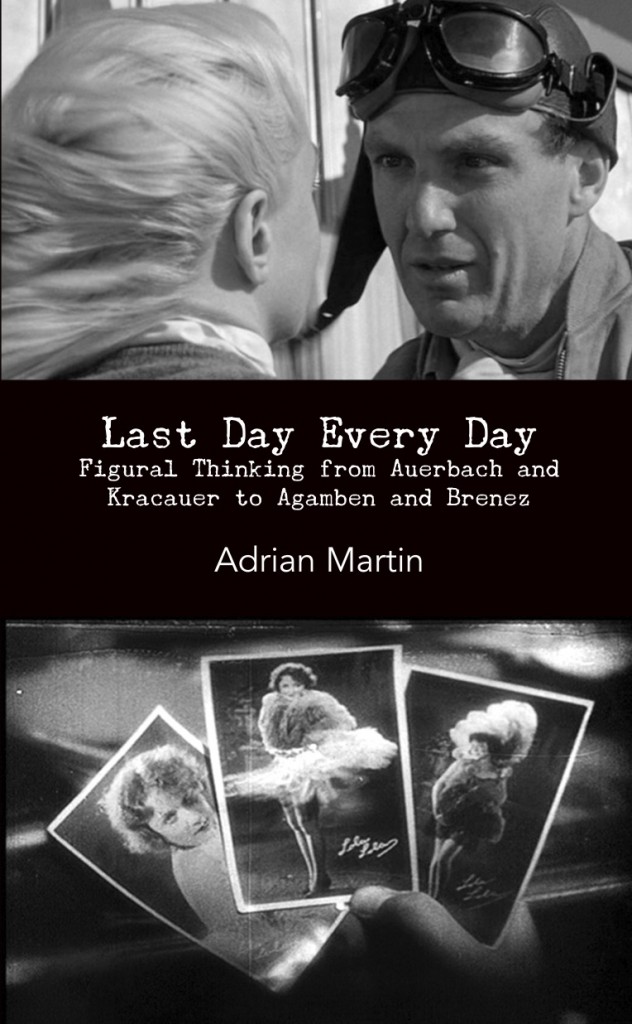 Where is film analysis at today? What is cinema theory up to, behind our backs? The field, as professionally defined (at least in the Anglo-American academic world), is presently divided between contextual historians who turn to broad formations of modernity, and stylistic connoisseurs who call for a return to old-fashioned things like authorial vision, tone, and mise en scène. But there are other, vital, inventive currents happening — in criticism, on the Internet, in small magazines, and renegade conferences everywhere — which we are not hearing much about in any official way. Last Day Every Day shines a light on one of these exciting new avenues.

Is there a way to bring together, in a refreshed manner, textual logic, hermeneutic interpretation, theoretical speculation, and socio-political history? A way to break the deadlock between classical approaches that sought organic coherence in film works, and poststructuralist approaches that exposed the heterogeneity of all texts and scattered the pieces to the four winds? A way to attend to the minute materiality of cinema, while grasping and contesting the histories imbricated in every image and sound?

In “A Philosophical Interpretation of Freud,” Paul Ricoeur (drawing upon Hegel) remarks: “The appropriation of a meaning constituted prior to me presupposes the movement of a subject drawn ahead of itself by a succession of ‘figures,’ each of which finds its meaning in the ones which follow it.” The notion of the figural has recently become popular in European film theory and analysis, especially due to the work of Nicole Brenez — in which the figure stands for “the force . . . of everything that remains to be constituted” in a character, object, social relation or idea. Her use of the term refers back to magisterial work of German literary philologist Erich Auerbach (Mimesis), who decoded the religious interpretive system wherein all persons and events are grasped as significant only insofar as they prefigure their fulfilment on the ‘last day’ of divine judgment.

Auerbach’s 1920s work on figuration in Dante was an important influence on his friend Walter Benjamin; and it was this ‘theological’ aspect of Benjamin’s thought that caught Kracauer’s attention, leading to the problematic of the redemption of worldly things. Last Day Every Day traces the notion of figural thinking from Weimar then to Paris (and beyond) today, taking in contemporary writings by William Routt and Giorgio Agamben, as well as two filmmakers also touched by such thinking and its cultural ambience: Josef von Sternberg (The Blue Angel) and Douglas Sirk (The Tarnished Angels).

Figural analysis has a resonance for its practitioners today that goes far beyond its theological roots and undertones. It has become a way to trace and write cultural history, sensitive to the smallest but most powerful vibrations, exchanges, and metamorphoses within texts, whether filmic, literary, pictorial, aural, or theatrical. Modern cinema, in particular, often reverberates with the apocalyptic thunder of the last day (think Lars von Trier’s Melancholia or Abel Ferrara’s 4:44 Last Day on Earth) — while also opening us to the miracles and mysteries, the perplexities and potentialities, of every day.

Adrian Martin teaches in Film and Television Studies, and is Co-Director of the Research Unit in Film Culture and Theory at Monash University (Melbourne, Australia). A practicing film critic since 1979, he is the author of five previous books (Phantasms, Once Upon a Time in America, Raúl Ruiz: sublimes obsesiones, The Mad Max Movies, and Qué es el cine moderno?) with A Secret Cinema forthcoming from re:press in 2013, as well as several thousand articles and reviews. He is Co-Editor of the on-line film journal LOLA and the book Movie Mutations: The Changing Face of World Cinephilia (British Film Institute, 2003).