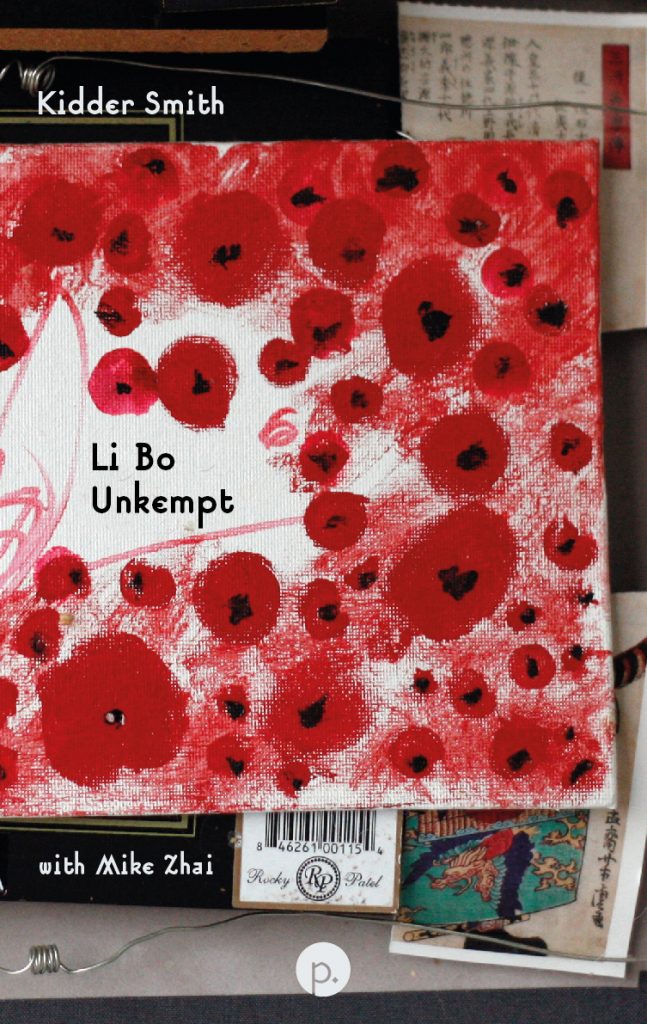 “Kidder Smith, respected sinologist and broadly learned man of letters, presents here a carefully curated selection of poems by the great Chinese poet Li Bo. Unlike other translators who misrepresent Li Bo as an eccentric mix of drunken roysterer and counterculture rebel, Smith expertly places the poet and his works in their proper historical setting. He also illuminates them further by an astonishing array of personal reflections and meditations drawn comparatively from many other literary and cultural traditions. The translations are superb and the book is a treat for all who love poetry and the magic of language.”

“This mixed-media poetry album offers at once a guidebook and a dialogue across thirteen centuries as two bon vivants conspire. Li Bo, the superstar Tang poet, charms his freethinking historian-translator, and Kidder Smith combines playful wit with unconventional, yet assured scholarship. What emerges are startling juxtapositions that reveal the known – and the unknowable – Li Bo.”

This is Li Bo. You may also know him as Li Po 李白 (701–62), the great poet of Tang China, master of swoop and soar, wanderer, man of wine, so enamored of the moon that he tried to embrace her reflection in the river, fell from his boat and drowned. Favorite of the Emperor—but only for a while, as such energies cannot be long contained at Court.

Li Bo Unkempt presents seventy of his verses, a few letters, some rhapsodies and songs. They dance all through Tang high culture, inhabited by planets, hermit women, swashbucklers, grottos, calligraphers and buffoons, Li Bo’s friends, lovers and alter egos. He’s too shy, too quick to make introductions, but this volume allows us to hear the poetry’s stories, their temperaments, to glimpse their secret economies of exchange. The book also offers background material, brief essays, a kind of Lonely Planet™ guidebook to this extraordinary realm. This way the strange will become familiar, and only then can we appreciate how truly strange it is.

The authors and translators regard these poems as magical acts. What is offered, then, in this volume, are multiple ways to realize that magic. The essays are demonstrations, a spell-book, an extension of this non-ordinary knowing. Things too delicate to be said directly. So the book proceeds by analogy, by juxtaposition, latency, innuendo, jump cuts, dialetheia and flirt. All this a way to understand a deeper claim: that Li Bo is an immortal.

Kidder Smith was graced to study with Y.K. Kao at Princeton and Peter Boodberg at Berkeley. For some years he taught Chinese history at Bowdoin College, where he also directed the Asian Studies Program. He is senior author of Sung Dynasty Uses of the I Ching (Princeton University Press, 1990); Sun Tzu—the Art of War (with Denma, Shambhala, 2001); and Having Once Paused – Poetry of Zen Master Ikkyū (with Sarah Messer, University of Michigan Press, 2015).

As a boy in Shanghai, Mike Zhai memorized Li Bo’s poems in school. Later, at UC Berkeley, he studied modern Chinese poetry under Bei Dao, as well as German literature and music. He holds an MFA in English from Mills College. A lecturer in English at the University of Michigan, he founded One Pause Poetry Salon in Ann Arbor in 2016. His poems have been published in Spectrum magazine, and in 2017 he won the Green House Poetry Prize for emerging poets.