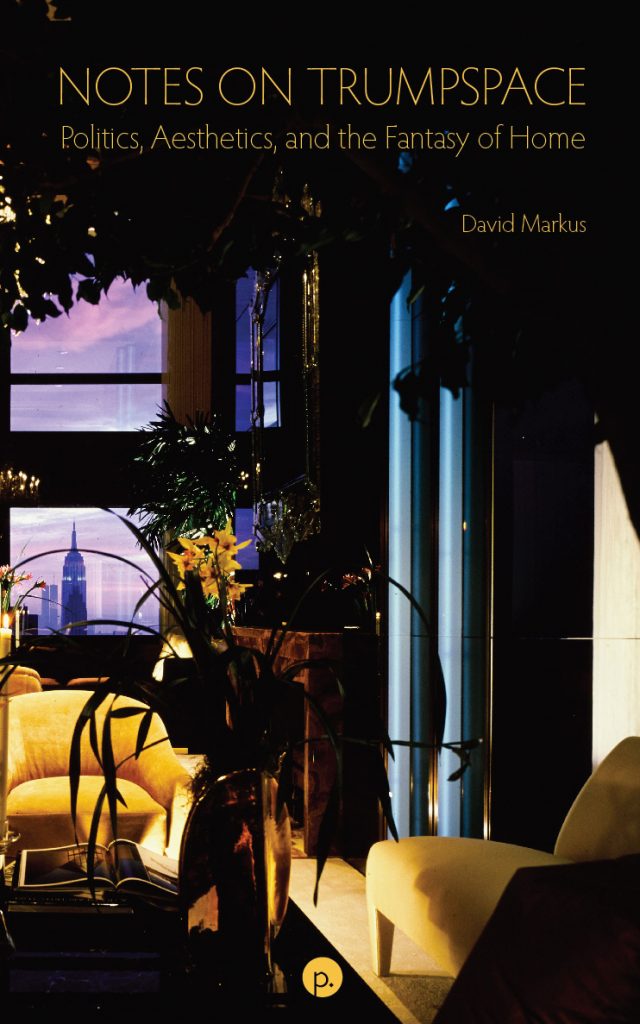 Your diamond in the sky. It seems a fantasy. And you are home.

In the wake of the 2016 U.S. Presidential election, considerable ink was spilled on the architecture and interior design of the buildings owned and inhabited by Donald J. Trump. In an effort to understand the inner workings of America’s first real-estate-mogul-in-chief, commentators remarked on everything from the president’s fastidious taste in window dressings to the exaggerated floor counts boasted by many Trump-branded towers.

Notes on Trumpspace takes this discursive trend as a point of departure. It examines not only key examples of “Trumpitecture” but also works of film, fiction, and contemporary art that center on or otherwise illuminate the psychogeography of “super luxury” real estate. Engaging closely with current political debates, the book takes a critical approach to mainstream liberal reactions to the Trump presidency. It argues that the fascination and horror Trump has provoked is owing in part to the way he lays bare the obsession with status, self-branding, and achievement-at-any-cost that has been part and parcel of the broader neoliberal ethos. Finally, it analyzes the January 6, 2021 storming of the US Capitol through the lens of spatio-political theorizations of settler colonial power and conceptions of home and homeland.

A genre-defying work of political and aesthetic inquiry, Notes on Trumpspace is a sustained investigation into the relationship between the built environment, late capitalist fantasy, and national identity. It asks what it means for current and future understandings of home and dwelling that this era’s most notorious peddler of high-end real estate succeeded in peddling his way into the White House in 2016.

David Markus is a Clinical Associate Professor in the Expository Writing Program at New York University. His interdisciplinary writing focuses on representations of dwelling and domesticity in late-capitalist contexts, social practices in contemporary art, and the conflict between intimacy and artistic ambition in twentieth-century literature, art, and film. His articles and reviews have appeared in publications such as Art in America, Frieze, Art Journal, Art Papers, Hyperallergic, Fence Digital, The Brooklyn Rail, and Flash Art.