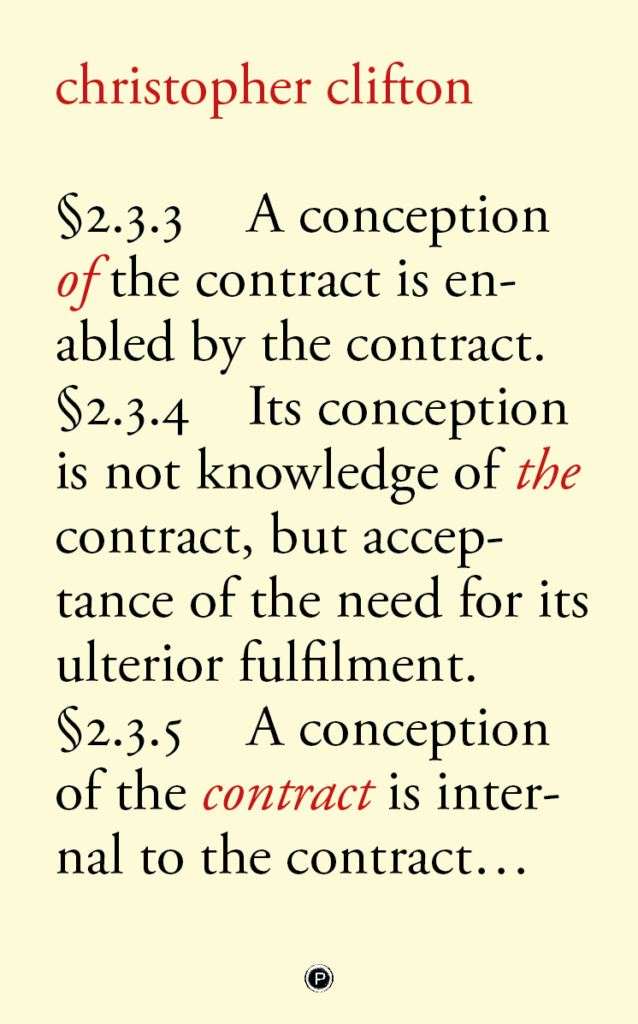 The question of the contract is a secondary question that has come in the awareness of the fact that there are things to take account of – that these things as such are given to begin with. That the question is impossible to answer once for all may be acknowledged in considering the fact that the conception of the contract as the ground of that which is will necessarily exclude that it be given as a thing to take account of. Rather it is thought of as already left behind by the awareness of the debt that it has grounded – which includes this very thought about the contract.

Of the Contract is a version of a text that is as old as any memory, or a form of legal instrument that constitutes the basis of the world in which its terms have been translated. The text remains as open to renewal as that world remains to future alteration, and the terms are both already past, and always yet to come. The notion of the debt that is presented by the contract corresponds to a conception of accountancy and finance that provide a new approach to the contemporary problem of the sense of that external to the terms of human access.

An account of the facility thus opened by the signing of the contract is as difficult to realize as an accurate prediction of the universe in twenty decades hence, much less one hundred million years. It appears to be as infinite as all the “possibilities” that may or may not happen in the future; or as endless as the futures that may ever be imagined by as many thinking beings as may come in any future. However it is only to account for in the singular investments that appear to presuppose its operation, which are actual and finite; and the more it would appear to be unlimited, the less it would appear to be a thing to take account of, or the less the thing accounted for appears to correspond to its potential.

A reinterpretation of the philosophical tradition that runs through Levinas and Heidegger to Kant, Of the Contract is also grounded in the medieval tradition that was centered on the notion of “contraction,” and its writing was inspired by forms of life such as those found in the development of monastic constitutions, and the novels of knight errantry. It is also an oblique contribution to the recent discussions on the nature of debt, and is deeply marked by an awareness of climate change, and the insufficiencies of capital to overcome this crisis.

All of these concerns however were contracted in a more acute awareness of the process of expression, and the work is given first of all as literature. It is the nature of the terms that they are open to untold interpretations.

Christopher Clifton was born in Australia, where he practices as a counsellor and psychotherapist. His novel Interpretations of the Contract is forthcoming from Called Back Books.