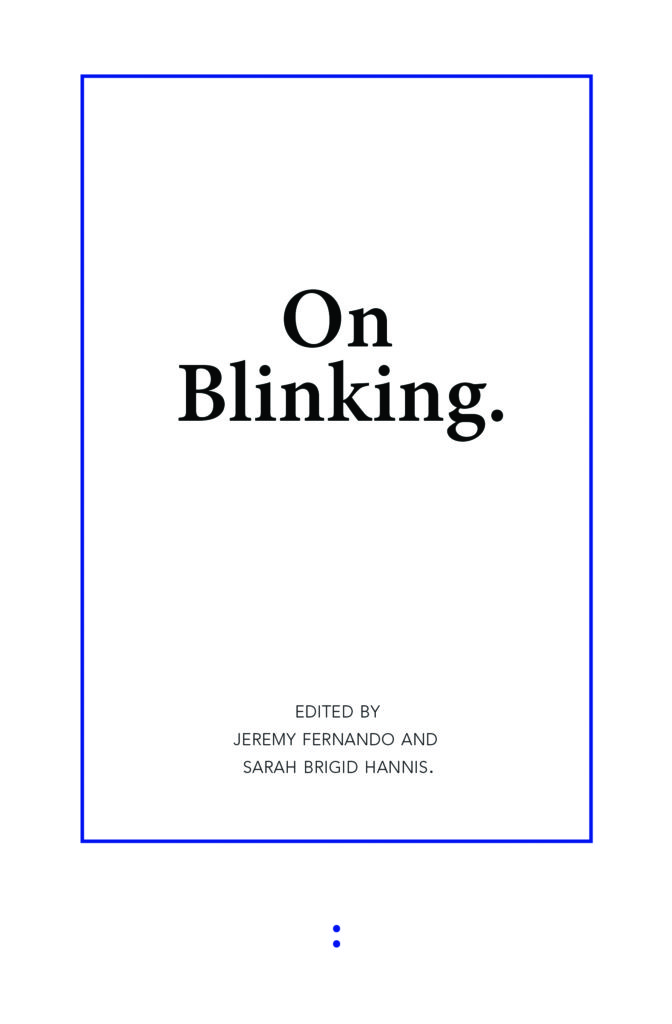 On Blinking opens a dossier on seeing. It looks not only to the epistemological sense of what it means to see or the hermeneutical sense of what is the meaning of that which is seen but attends to various sites of knowledge – photography, literature, and philosophy. And in doing so, it questions the privileging of presence and sight in Western thought. Thus, this book, through the essays – “Emerging Sight, Emerging Blindness” (Brian Willems); “Augen, Blicke, Stätten” (Julia Hölzl); “At the Risk of Love” (Jeremy Fernando); and “Suspended in a Moving Night: Photography, or the Shiny Relation Self-World” (Jessica Aliaga Lavrijsen) – attempts to address the question what is seeing.

Jeremy Fernando is the Jean Baudrillard Fellow at the European Graduate School, where he is also a Reader in Contemporary Literature & Thought. He works in the intersections of literature, philosophy, and the media; and has written twelve books — including Reading Blindly, Living with Art, and Writing Death. His work has been featured in magazines and journals such as Berfrois, CTheory, TimeOut, and VICE, amongst others; and he has been translated into Spanish and Slovenian. Exploring other media has led him to film, music, and art; and his work has been exhibited in Seoul, Vienna, Hong Kong, and Singapore. He is the general editor of both Delere Pressand the thematic magazine One Imperative; and a Fellow of Tembusu College at the National University of Singapore.

Sarah Brigid Hannis did her Masters in Media and Communication at European Graduate School (EGS) after having completed her undergraduate studies in Integrated Media at the Ontario College of Art & Design University. She has since worked for academic, media, and cultural institutions in administration, content production, writing, editing, and translation.