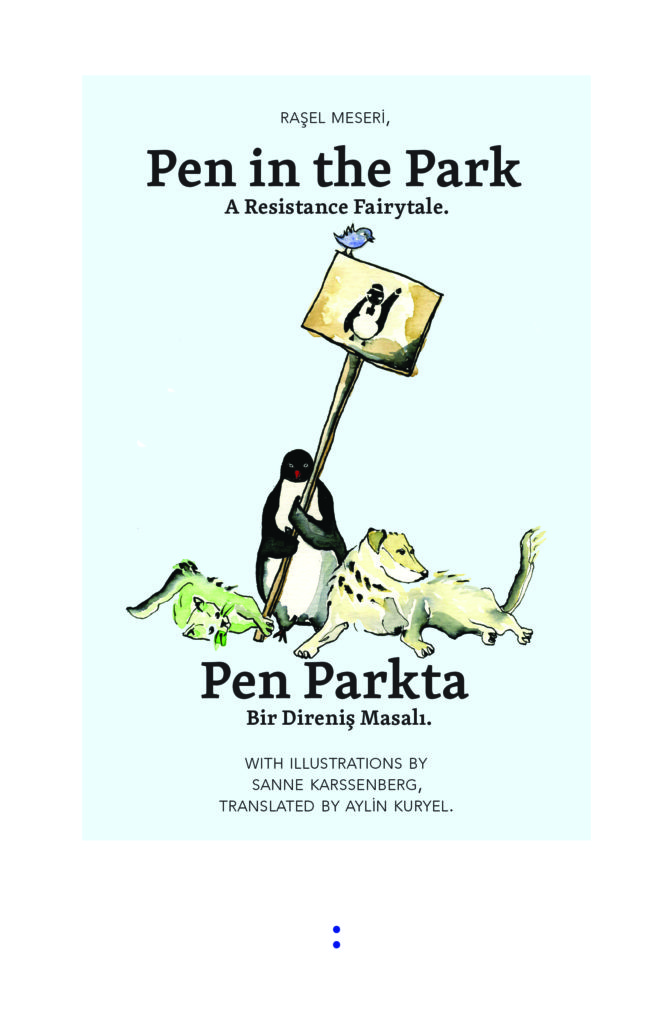 Pen in the Park is a unique revolutionary children’s book written by Raşel Meseri and illustrated by Sanne Karssenberg. Meseri narrates the Gezi Park protests in Istanbul through the figure of a penguin named Pen, whogoes on a trip from Antarctica to Gezi Park to save his fellow penguins, and gets involved in various adventures with his friends Chapulletta, the cat Trafo, and the dog Loukanikos.

The Gezi movement of 2013–14 started with the threat of the destruction of the Gezi Park, a public space, which became quickly occupied by protestors from all generations and political backgrounds to build a movement that addressed not only the destruction of green areas and gentrification of public space, but also the democratic deficit of the country as such. At the height of the protests, dozens of protesters were killed and thousands injured. As the result of the protests, the park remained a public space and the struggle continues in different forms up to this day.

During the protests, penguins were reclaimed as one of the symbols, as the main television channels preferred to show documentaries about the lives of penguins, instead of the uprising in Turkey. In Meseri’s story, Pen the brave penguin, Pen, is both a symbol and an active agent in the course of events, guiding us through the process of political emancipation, democratic experiment, friendship, and solidarity that characterizes the Gezi movement.

Raşel Meseri, a graduate in cinema studies, is one of the people who betrayed the education she got, and did not make films for many years; neither did she hunt the words describing another possible world. Yet, after a while, she found the right track and started to make documentaries and short films on everyday life and discrimination, shown in international film festivals and art exhibitions. When the children around her grew up, she invented imaginary children friends to write them stories. Two of her children's books are published in Turkish and the others she has completed are impatiently waiting to be published. She also wrote theater plays for children, they are staged in İzmir and Istanbul, Turkey. Pen in the Park, a fairytale of the Gezi resistance in Turkey, is the most realistic text she has ever written.