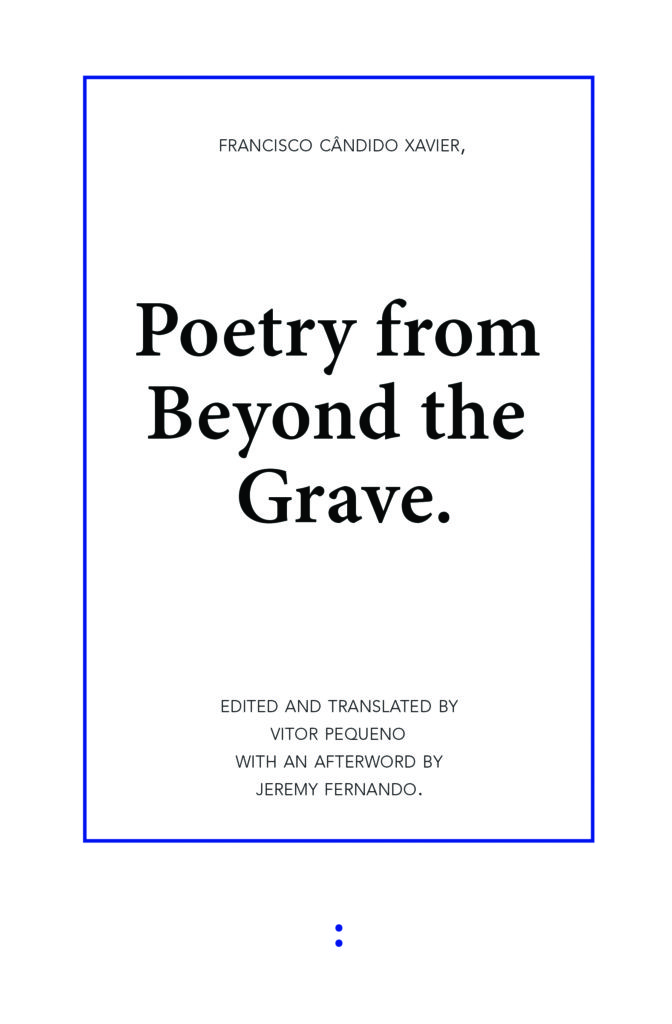 Poetry from Beyond the Grave is the first English publication of a large selection of poems by the Brazilian medium and Spiritist leader Francisco Cândido “Chico” Xavier. These poems, originally collected in the volume Parnaso de Além-Túmulo, were dictated to Xavier by a variety of spirits of Brazilian poets from the afterlife, as journeying souls or as witnesses of the spiritual city Nosso Lar, “our house.” Poetry from Beyond the Grave is a veritable collection of haunted writing, in which poets present their posthumous work as if they were alive. The brilliant translation by Vitor Pequeno is supplemented by an extensive afterword by Jeremy Fernando, who traces what it means to speak through the other.

Francisco Cândido "Chico" Xavier (April 2, 1910 – June 30, 2002) was a popular philanthropist and medium in Spiritism. During a period of 60 years he wrote up to 450 books and several thousand letters claiming to use a process known as "psychography and after his death many dozens of books were issued based on old letters and manuscripts which gradually became public bringing the total number of books up to 496." The books written by Chico covered a vast range of topics from religion, philosophy, historical romances and novels, Portuguese Literature, poetry, scientific as well as thousand letters intended to inform, console and uplift the families of deceased persons during his psychographic sessions.  Xavier called his spiritual guide Emmanuel, who according to Xavier, lived in ancient Rome as Senator Publius Lentulus, was reincarnated in Spain as Father Damien, and later as a professor at the Sorbonne. (From Wikipedia)