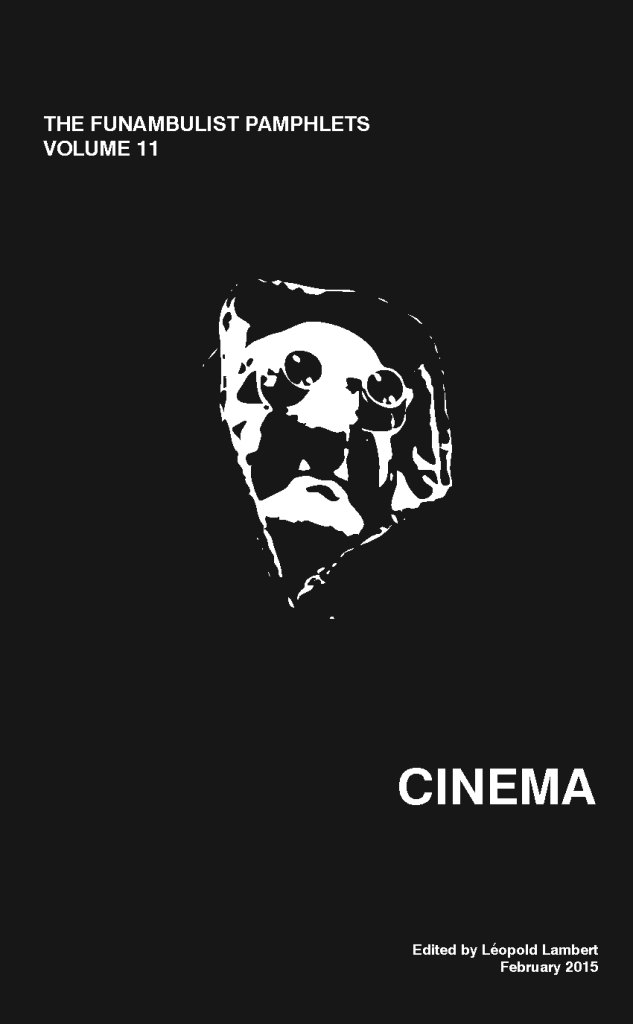 Who are the ‘we’ in this movie? The stubborn director who values ‘history’ more than what is happening in front of him in the present? The venal producer who is finally the most eager to dialogue with the local population while remaining slightly paternalist? The actor playing Christopher Columbus to whom the difficulty of this problem appears very clearly, but who prefers to escape from it by drinking rather than acting? The other actors who value their 15th-century ethical characters but act like cowards when the riots begin? Or can we possibly be somebody else?

Volume 11 is devoted to the topic of Cinema: Spike Lee, Béla Tarr, Michelangelo Antonioni and the many other filmmakers named in this volume do not seem to have much in common at first sight; nevertheless, considered through the interpretation of a Spinozist materialist philosophy, their films might have something to say to one another. Take the mud of Red Desert (Antonioni), the volcanic slopes of The Bad Sleep Well (Kurosawa) and the soil of Pina Bausch’s Rite of Spring magnified in Pina (Wenders), for example. What these material manifestations have in common is that they are all in relation with bodies, themselves assemblages of moving matter. Similarly, consider Spike Lee’s dolly shot, Orson Welles’s labyrinth, Béla Tarr’s entropy, and Peter Watkins’s democratic improvisations: they all manifest the power of immanence and its inexorability. These films involve no deus ex machina; everything in them comes ‘from the ground’ in a continuous refusal of a celestial or other form of transcendence. Developing this kind of reading of these films allows us to avoid a traditional chronological reading of history of cinema in favor of another, one more dedicated to the philosophical vision of the world that cinema triggers.

Vol. 11_Cinema includes: Introduction: The Cinema Papers — La Haine: Banlieue and Police — Paris Is Burning: Gender, Sexuality and Race’s Performativity — Coriolanus: State of Exception — World War Z: The Zombie Is a Human You Have the Right to Kill — The Act of Killing: What Constitutes the Act of Killing? — Hunger: The Body at War — The Diary of an Unknown Soldier & The Forgotten Faces: Two Films by Peter Watkins — La Commune (Paris, 1871): Democratic Cinematographic Construction — Sleep Dealer: Separating the Body and its Labor Production — Even the Rain: What Kind of Leftist Do We Want to Be? — Dogtooth: Emancipation from a Sadian Patriarchal World — The Exterminating Angel: We Must Become Claustrophobic Architects — Un Chien Andalou: Dream as True Horror — The Trial: The Kafkaian Immanent Labyrinth as Postmortem Dream — Enter the Void: Post-Mortem Wandering — Holy Motors: Phenomenological Introspection — The Turin Horse: Entropy of Mind and Matter — Red Desert: Corrupted Materials — Gravity: An Ode to Gravity — Pina: The Weight of the Body Dancing — Wings of Desire: Der Erzähler (the Storyteller) — Akira Kurosawa: Applied Spinozism — Spike Lee: The Dolly Shot as Inexorability of Immanence

Léopold Lambert (born in 1985) is a French architect who has lived in Paris, Hong Kong, and Mumbai and currently resides in New York. His approach to architecture consists in a delicate articulation between theoretical research and a frank enthusiasm for design. Such an articulation has been explicated in his book Weaponized Architecture: The Impossibility of Innocence (dpr-barcelona, 2012), which attempts to examine the characteristics that make architecture an inherent political weapon through global research as well as an architectural project specific to the Israeli civil and military occupation of the West Bank. He is also the author of the graphic novel, Lost in the Line. He finds his architectural inspiration from films, novels, and political philosophy books, rather than in architectural theory texts.

The blog The Funambulist: Architectural Narratives, a daily architectural platform written and edited by Léopold Lambert, finds its name in the consideration for architecture’s representative medium, the line, and its philosophical and political power when it materializes and subjectivizes bodies. If the white page represents a given milieu — a desert for example — and one comes to trace a line on it, (s)he will virtually split this same milieu into two distinct impermeable parts through its embodiment, the wall. The Funambulist, also known as a tightrope walker, is the character who, somehow, subverts this power by walking on the line.