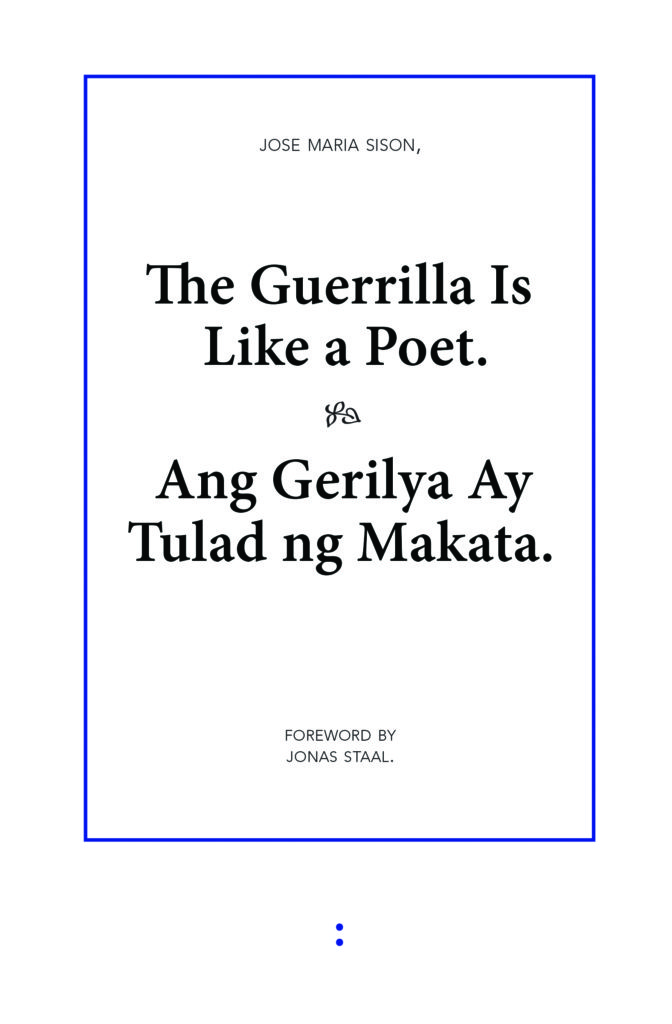 This book is titled after the world-renowned poem of Jose Maria Sison, “The Guerrilla Is Like a Poet,” which celebrates with natural imagery and in a lyrical way the Filipino people’s revolutionary struggle for national liberation and democracy against foreign and feudal oppression and exploitation. The book contains poems from Sison’s Prison and Beyond, which won the Southeast Asia WRITE Award, as well as new poems that further develop the theme of struggle for national and social liberation as well as exile. It also carries articles of creative writers on the significance and relevance of his poetry. Sison is a Filipino revolutionary with extensive guerrilla experience and has been a recognized poet since his student days at the University of the Philippines. The publication of this book has been sparked by the effort of the Academy for Cultural Activism of the New World Summit to present the people’s culture in the national democratic struggle in the Philippines.

Jose Maria Sison taught English literature and political science in several Philippine universities. He is an authority in Marxist theory and practice. He founded the Communist Party of the Philippines in 1968 and thereafter the New People's Army and the National Democratic Front. He survived torture and imprisonment under the Marcos dictatorship from 1977 to 1986. He won the Southeast Asia WRITE Award for poetry in 1986. He has written books of poetry and on politics, economy, society and culture. Although a recognized political refugee in the Netherlands since 1992, he is denied legal admittance as refugee. He won his legal cases against terrorist blacklisting in the European Union and false criminal charges fed by the Manila government to the Dutch government.