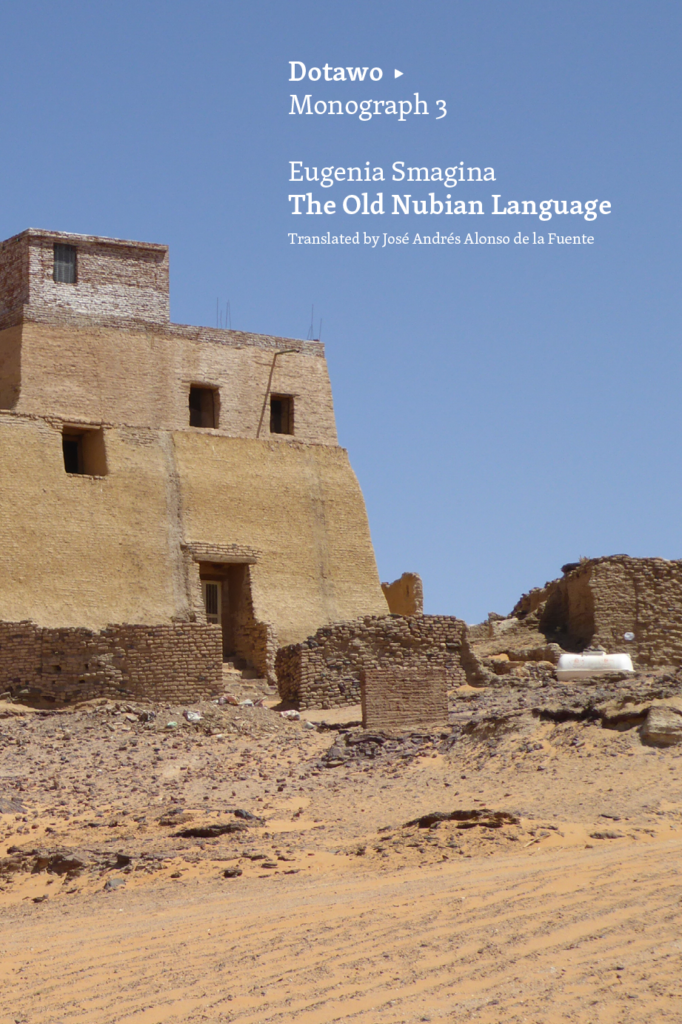 Eugenia Smagina (Евгeния Б. Смaгина) first published her grammar of the Old Nubian language in 1986 in Russian. For more than thirty years the work has remained untranslated, even though the late Gerald M. Browne affirmed that “this lucid, well-argued presentation should be available to all Nubiologists and ought therefore be translated into a western language.”

Slavicist José Andrés Alonso de la Fuente has prepared a first English translation of this concise but indispensable work, which forms a necessary counterpart to Browne’s classic Old Nubian Grammar. The grammar is divided into sections on script, lexicon, morphology, and syntax, and is followed by the analysis of a sample text, known as The Miracle of St. Mēnas.

Smagina’s The Old Nubian Language provides an excellent first introduction into the grammar of this medieval Nilo-Saharan language.

José Andrés Alonso de la Fuente graduated from the Complutense University of Madrid with a major in Slavic Studies. After various stays in Germany, France, Poland, and Finland, he became interested in the linguistic diversity of China and Northeastern Eurasia, with a special focus on Chinese, the Tungusic languages, Ainu, and Japanese. He earned his PhD in Linguistics from the University of the Basque Country in 2012 with a dissertation on Ainu historical linguistics. His research revolves around historical and comparative linguistics, typology, syntax, language documentation, and endangered languages from Asia and Africa.

Eugenia Smagina is a philologist who completed her studies in Classical Philology at the Russian State University Lomonosov, Moscow. She wrote her PhD thesis Language of the Old Nubian Texts at the Department of the Ancient Orient, Institute for Oriental Studies, Russian Academy of Sciences, Moscow, where she graduated in 1980. She became a research fellow at the Institute for Oriental Studies and has won scholarships from the Alexander von Humboldt Foundation to work in the Institute of Coptology, Westphalian Wilhelms-University, Münster, Germany (1992–1994, 1996) and from the University of Jerusalem, Israel (1999–2000). Smagina is currently Chief of the Department of History and Culture of the Ancient Orient of the Institute for Oriental Studies, Russian Academy of Sciences, Moscow; Vice-director of the Vladimir S. Golenishchev Center of Egyptology of the Russian State University for the Humanities, Moscow; and Associate Professor of the Chair of Holy Scriptures of the St. Philaret Orthodox-Christian Institute, Moscow.

One thought on “The Old Nubian Language”