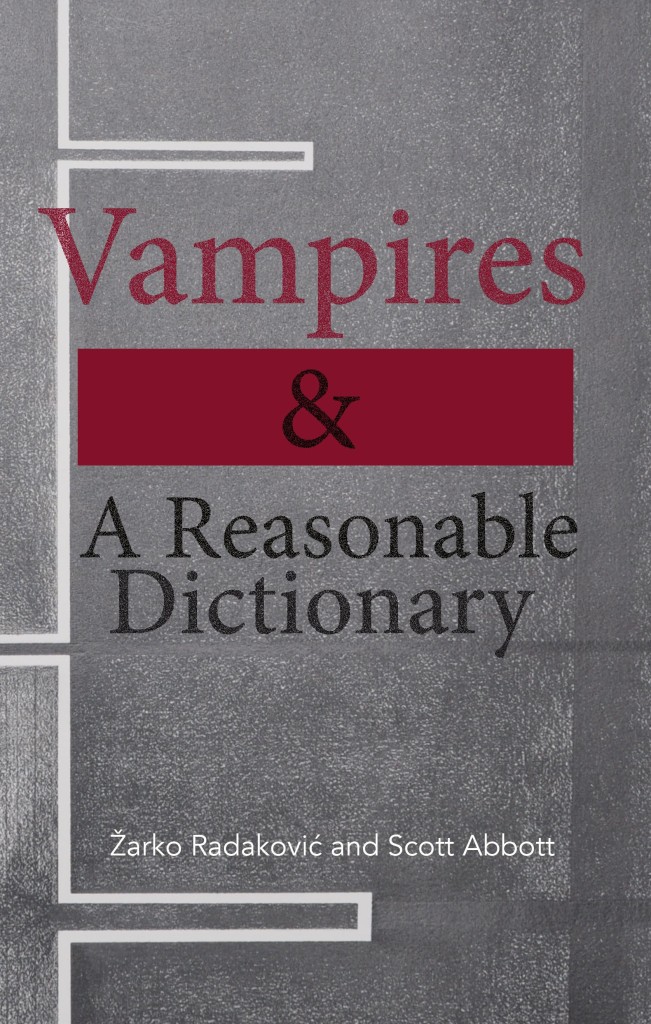 A four-handed intimate artistic witness to the worlds we no longer belong to and to which we never belonged, to being foreign, and to the power of creative friendship in the work of interpreting a real and historical space that we understand less and less the closer we are. Undertake an exploratory journey through the para-regions of the literature of Peter Handke, through the labyrinths of translated originals and of original translations, through the realms of thought whose borders are the Rocky Mountains, Višegrad, Cologne, and Belgrade; allow this two-seater without steering to show you these borders in a way only you can experience! 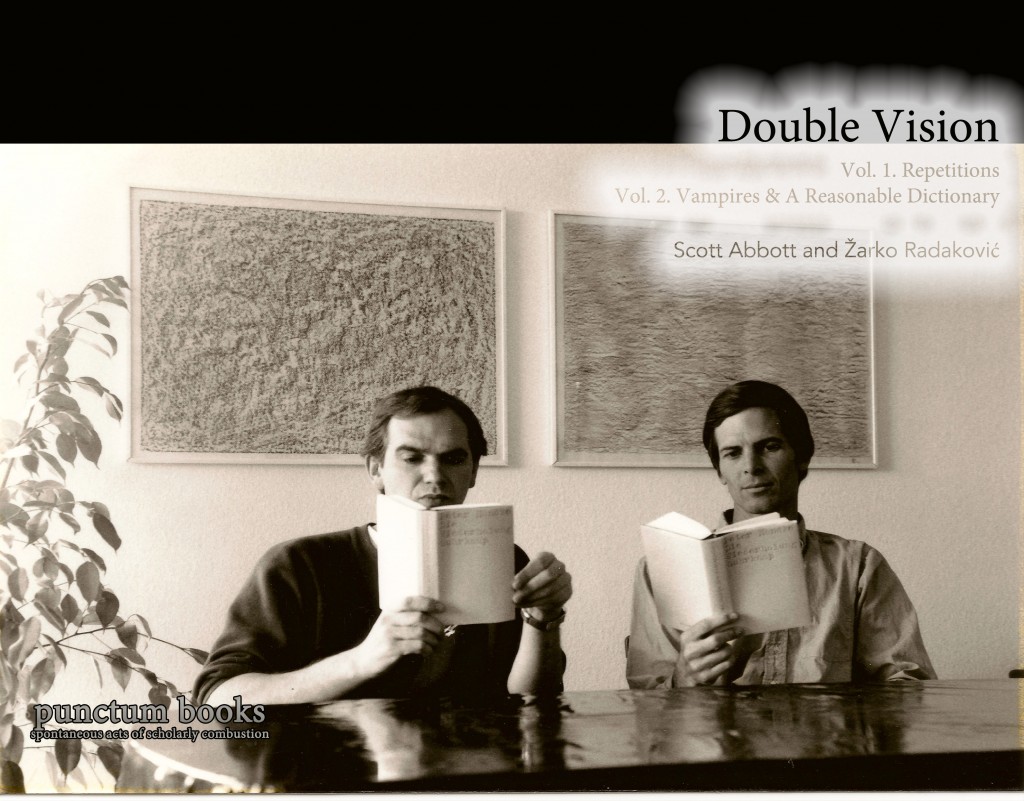 by Scott Abbott and Žarko Radaković

As a follow-up to their first collaboration Repetitions (published in Belgrade in 1994, and in English by punctum in 2013), in 2008 the authors published, also in Belgrade, Vampiri & Razumni recnik, published here by punctum as Vampires & A Reasonable Dictionary. Vampires is Radaković’s fictionalized account of a Serb living in Cologne, Germany while his former country disintegrates. He travels in the American West, ostensibly looking for the vampires causing chaos in his own country, and then returns to Europe, having found no vampires. It is a dark text, a story of destruction told in a narrative that refuses all the solaces narrative has traditionally afforded. A Reasonable Dictionary is Abbott’s personally troubled account of his and Radaković’s trip up the Drina River between the civil wars, a journey made with the novelist Peter Handke, a trip during which some of Abbott’s specifically American stories lost their moral structure.

Both works examine generic distinctions and question storytelling in general, all in the context of travel in Yugoslavia, in the former Yugoslavia, and in western America. Two aspects make the books unique. First, they are written about experiences shared by two authors whose native languages are Serbian and English respectively (German is their only common language). The authors’ perspectives contrast with and supplement one another: Radaković grew up in Tito’s Yugoslavia and Abbott comes from the Mormon American West; Radaković is the translator of most of Peter Handke’s works into Serbo-Croatian and Abbott translated Handke’s provocative A Journey to the Rivers: Justice for Serbia for Viking Press and his play Voyage by Dugout: The Play of the Film of the War for PAJ (Performing Arts Journal); Radaković was a journalist for Deutsche Welle in Cologne and Abbott is a professor of German literature at Utah Valley University; Radaković is the author of several novels and Abbott has published mostly literary-critical work; and so on. Two sets of eyes. Two pens. Two visions of the world.

Further, the years 1994 and 2008 (publication dates for Repetitions and Vampires & A Reasonable Dictionary in Belgrade, respectively) bracket a horrendous period in the history of Yugoslavia. The authors changed during that period as well — divorces, new partners, new jobs; and Peter Handke, while metamorphosing into the bête noir of the press after his attacks on media portrayals of the Yugoslav wars, became the authors’ friend and entered their second text as a fellow traveler.

Scott Abbott is the author of Fictions of Freemasonry: Freemasonry and the German Novel and of two books with Žarko Radaković, Ponanvljanje (Repetitions) and Vampiri & Razumni rečnik (Vampires & A Reasonable Dictionary). He was the jazz critic for the Salt Lake Observer and co-author, with Sam Rushforth, of the series “Wild Rides, Wild Flowers: Biking and Botanizing the Great Western Trail” which appeared for four years in Catalyst Magazine (published as a book by Torrey House Press in 2014). He has translated Peter Handke’s A Journey to the Rivers: Justice for Serbia (Viking) and Handke’s play Voyage by Dugout: the Play of the Film of the War (PAJ). A translation of Handke’s “To Duration, A Poem” is forthcoming with Cannon, Amsterdam. Abbott has published reviews of books and art in The Bloomsbury Review, Open Letters Monthly, and Catalyst Magazine. He is Professor of Philosophy and Humanities at Utah Valley University and has published literary-critical articles on Goethe, Schiller, Kleist, Thomas Mann, Rilke, Grass, and Handke. With Lyn Bennett, he is working on a book about how barbed wire was given meaning in late nineteenth-century advertising and then in literature of the twentieth and twenty-first centuries (“It was a nun they say invented barbed wire,” James Joyce, Ulysses). For a book to be called “On Standing,” he is analyzing the metaphor of standing in literature and philosophy. He lives in Woodland Hills, Utah.

Žarko Radaković is the author of several books published in Belgrade, including Tübingen, Knifer, Ponanvljanje (Repetitions, with Scott Abbott), Emigracija (Emigration), Pogled (The View), Vampiri & Razumni rečnik (Vampires & A Reasonable Dictionary, with Scott Abbott), Strah od Emigracije (Fear of Emigration), Era, and Knjiga o muzici (A Book about Music, with David Albahari). He has translated more than twenty of Austrian author Peter Handke’s books into Serbian and has been traveling companion and translator for Handke during repeated trips to Serbia, Bosnia, Montenegro, and Kosovo. He collaborated on three performances with performance artist Slobodan Era Milivojević (1971, 1973, and 1974). His recent work with Serbian/German artist Nina Pops includes collaboration on a series of collages that feature manuscript translations of Peter Handke’s novel Bildverlust (The Loss of Images, or Crossing the Sierra de Gredos) and Pops’ “translations” of the text into images. Radaković edited an edition of the German literary magazine Nachtcafé on the theme of Walking, and more recently, with Peter Handke, an edition of the German literary magazine Schreibheft on “Literature from Serbia.” He has published essays on art, music, and literature. David Albahari described Radaković as “one of the few absolutely isolated, independent, creative personalities of contemporary Serbian prose. . . . He deals with our language like a foreign language in the same way Beckett uses the English language and Handke the German language. . . . I think I will not be wrong when I say that Žarko . . . is the most radical Serbian writer of the present time.” He lives in Cologne, Germany.

One thought on “Vampires & A Reasonable Dictionary”