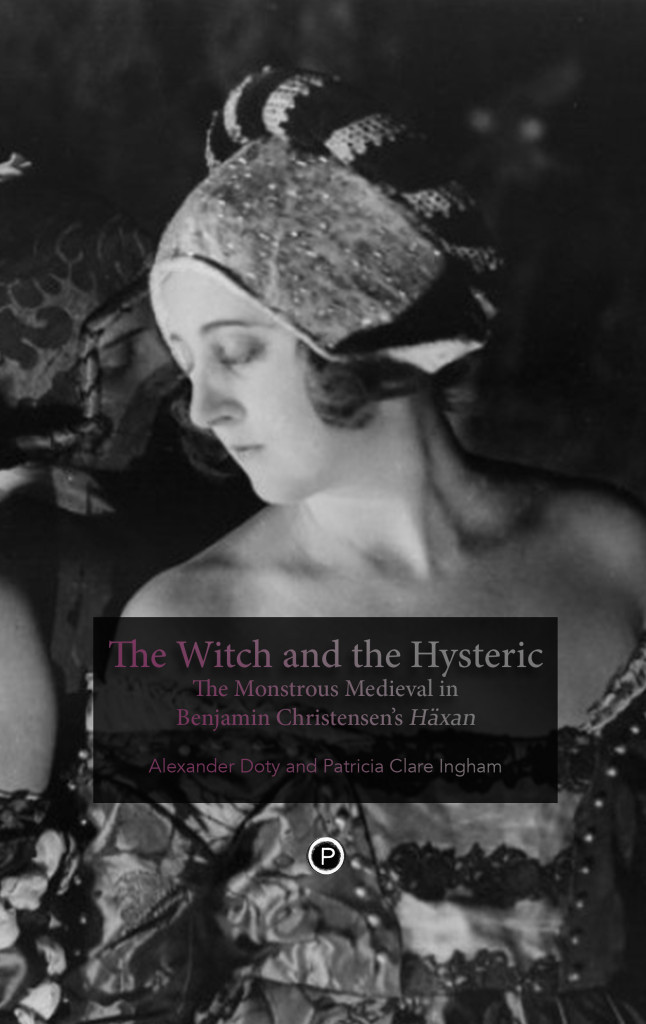 Benjamin Christensen’s 1922 Swedish/Danish film Häxan (known under its English title as Witchcraft Through the Ages) has entranced, entertained, shocked, and puzzled audiences for nearly a century. The film mixes documentary with fantasy, history with theatrics, religion and science, the medieval past and modern culture. This uncanny content is compounded by the film’s formal strangeness, a mixture of quasi-documentary with fictional episodes, illustrated lectures alongside docudrama recreations and dreamscapes.  Is this a documentary, a horror flick, or both? In this chapbook, authors Doty and Ingham argue that the puzzle of Christensen’s Häxan might be unraveled by attending to the film’s provocative and paradoxical medievalism, its fantasmatic rendering of the witch as a medieval monster. Such monstrous medievalism, moreover, sheds considerable light on the politics of gender and culture once the witch is rendered a female figure in a time out-of-joint.

Alexander M. Doty† liked to joke that he was born in a trunk at the Princess Theatre in Pocatello, Idaho. If you get that reference, then you won’t be surprised to learn that Alex’s groundbreaking work was in the fields of GLBTQ and Film and Media Studies. Born in Waltham, Massachusetts in 1954 (the year A Star Is Born was released), his family finally claimed west Texas as home. After decades of resistance, he embraced the land of tumbleweeds, roadrunners, and horned toads. He received his BA from the University of Texas-El Paso (or “Harvard on the Border” as it is known on bumper stickers), and MA and PhD degrees from the University of Illinois, Urbana-Champaign. He held academic positions at The American University of Cairo, at Lehigh University in Bethlehem, PA, and, from 2007 until his untimely death in 2012, at Indiana University, in Bloomington, where he held a joint-appointment in the departments of Gender Studies and Communication and Culture, and served on the board of the famous Kinsey Institute. His books, Making Things Perfectly Queer: Interpreting Mass Culture (Minnesota, 1993) and Flaming Classics: Queering the Film Canon (Routledge, 2000) changed the face of the fields and remain influential to this day. As does his co-edited volume (with Corey Creekmur), Out in Culture: Lesbian, Gay, and Queer Essays on Popular Culture (Duke, 1995), the first volume of its kind. He was the author of a host of articles and an editor for two special issues of Camera Obscura: “Fabulous! Divas I and II.”

When, in 1995, Patricia Clare Ingham left California for her first academic job, she was lucky enough to land on the faculty with Alex Doty at Lehigh University. With an MA and PhD from the University of California, Santa Barbara, she joined the faculty of English at Lehigh, where she taught medieval literature and language, critical theory, Gender Studies, and whined about winter. She is the author of Sovereign Fantasies: Arthurian Romance and the Making of Britain (Pennsylvania, 2001), co-editor (with Michelle Warren) of Postcolonial Moves Medieval Through Modern (Palgrave Macmillan, 2003), and currently serves as co-editor of the award-winning journal, Exemplaria. She has published a number of articles on medieval romance, psychoanalysis, and Chaucer, and her book, The Medieval New: Ethical Encounters in an Age of Innovation will be out from University of Pennsylvania Press in 2015. She is particularly grateful for having had the opportunity to collaborate with Alex, misses him madly, and is especially proud of an article they co-authored: “The ‘Evil Medieval’: Gender, Sexuality, and Miscegenation in Val Tournier’s Cat People,” in the collection Bad: Infamy, Darkness, Evil, and Slime on Screen (SUNY, 2003). She currently teaches English at Indiana University, Bloomington.