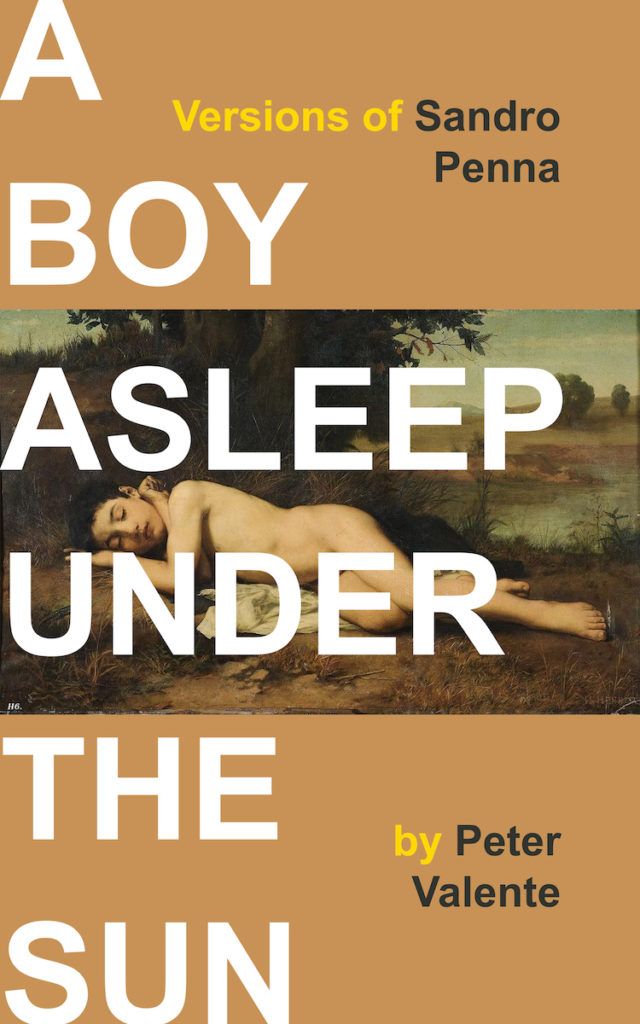 Younger than Umberto Saba and Eugenio Montale, but older than Pier Paolo Pasolini, who championed him, Sandro Penna has been virtually unknown in the English speaking world. With abruptness and clarity, these exquisite and sometimes disturbing lyrics come at you as if they had just been discovered, taken directly from the secret hand of the poet. In Peter Valente’s extraordinary “variations” of texts dating from 1927 until Penna’s death in 1977, the transmission is electric.

Peter Valente’s versions of Sandro Penna are beyond remarkable, capturing with precision the homoerotic thrust of the spare but deeply felt originals — suggestive, intimate, delicate, and kind, knowing well the sorrows as well as ecstasies that poetry, like desire, admits. “I loved everything in the world,” says Penna in Valente’s translation. “And I possessed nothing / but my golden book of words.”

~ Ed Foster, founder of Talisman House and author of Dire Straits (2012) and The Beginning of Sorrows (2009)

Peter Valente’s first encounter with Sandro Penna’s poetry was while translating Pier Paolo Pasolini. At the time, Valente was reading a biography on Pasolini and learned of his close friendship with Penna. Pasolini insisted that among serious readers of poetry, Penna could not be ignored. Born in Perugia on June 12, 1906, Sandro Penna lived most of his life in Rome (he died there on January 21, 1977), except for a brief period in Milan where he worked as a library clerk. When Pasolini arrived in Rome in 1950 he sought out Penna to “show him around.” He knew that Penna was in love with the same ragazzi who prowled the outskirts of Rome.

Here they are, these lords of life.

They are very modest, indeed.

Even with their senses fully aroused,

they manage to offend no one.

Penna never hid his sexuality in interviews. He once told a reporter (who probably had to pay dearly for the interview), “I am not a homosexual. I am a pederasta.…Homosexuality is a privilege.” Penna’s homosexuality is complicated in one sense by a moral dilemma:

The problem of sex

I wonder at each moment

whether I am doing the right thing

But there is another sense in which Penna accepts the impossibility of a moral resolution to his “problem” and instead turns this negative to a positive value:

There are always boys in my poems.

But I do not know how to speak of anything else.

Everything else is just a tedious noise.

I am unable to sing of Good Deeds.

Since his poems chiefly concern homosexual love, they face being relegated to a gay-only ghetto of readers or to another ghetto that even homosexuals avoid: pederastia. This is a problematic issue in the United States where scandal surrounding sexual orientation is still prevalent. But more importantly, there are no glamorous pronouncements or concern with gender politics in Penna’s poetry. You also won’t find a vision of historical process or a mass of physical details. What you will find is an attachment to everyday reality. Penna’s poetry is candid, uncluttered, minimalist, and of profound lyrical intensity and as Pasolini, a great supporter of Penna’s work, wrote in the 1970 preface to Penna’s collected poems, he is, “perhaps the greatest and most joyful…Italian poet.”

Peter Valente was born in Salerno, Italy and grew up in New Jersey. He holds a B.S. in Electrical Engineering from Stevens Institute of Technology. He is the author of the chapbook, Forge of Words a Forest (Jensen Daniels, 1998), and his poems have appeared in journals such as Mirage #4/Periodical, First Intensity, Prosodia, Aufgabe and Talisman. In the late 1990s, he co-edited the poetry magazines Vapor/Strains and Lady Blizzard’s Batmobile and wrote articles on jazz for the Edgewater Reporter. In 2010, he turned to filmmaking and has completed 60 shorts to date, 24 of which have been screened at Anthology Film Archives. He has translated the work of Luis Cernuda, Nanni Balestrini and Pier Paolo Pasolini, and he is the co-translator of the chapbook, Selected Late Letters of Antonin Artaud, 1945-1947 (Portable Press at Yo-Yo Labs, 2014). His book The Artaud Variations is forthcoming from Spuyten Duyvil.

2 thoughts on “A Boy Asleep Under the Sun: Versions of Sandro Penna”