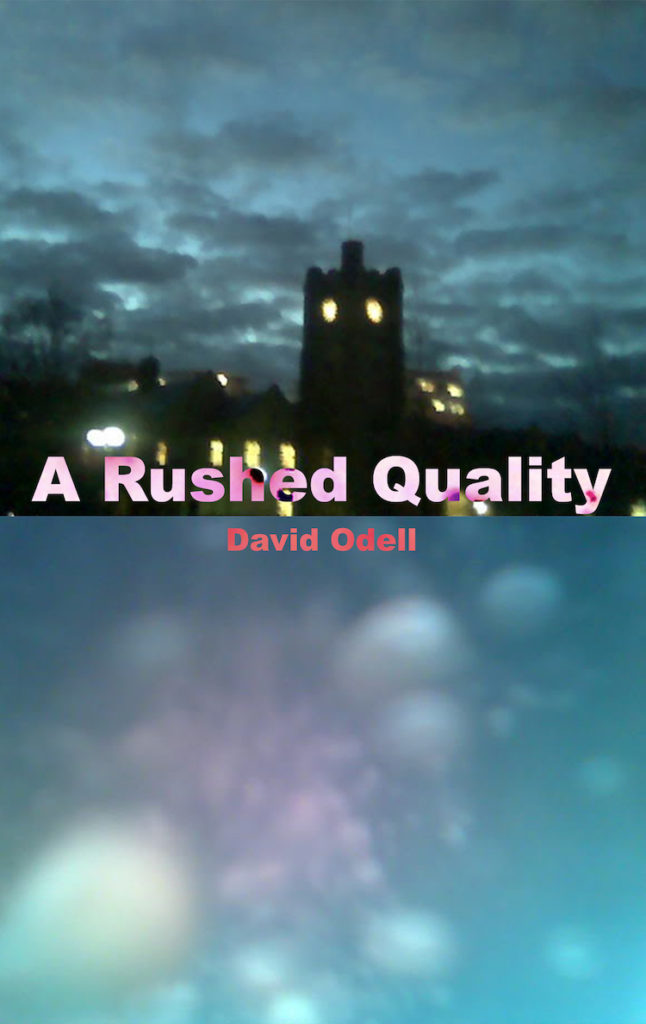 A Rushed Quality is in fact anything but. In a series of exquisite and precise meditations/aphorisms, Odell presents a singular phenomenology, enfolding X, Y, and Z. The accumulative effect is something akin to a pin-hole camera on Existence writ large, or alternatively a vast camera obscura inflating a tiny detail of life. The body, perception, affect, desire — all the major philosophical and ontological themes are seen through fresh eyes, providing a perspective at once estranging and familiar. Moreover, and most importantly, Odell’s book provides a refreshing new voice in what we might call poetic theory, unconcerned with academic fads, deftly splicing rigor, humor, and a daily necklace of intimate epiphanies.

~ Dominic Pettman, author of In Divisible Cities and Humid, All Too Humid

These fragments collected here (in 2 books, “A Rushed Quality” and “Bodying Forth”) belong neither to philosophy nor to poetry — and yet they are for the most part focused on a substantial area of overlap between these two venerable disciplines, vis-à-vis the question, “What is it like to be X?” Philosophers like to fill in the X with something exotic like a bat or a dolphin, or even an Artificial Intelligence, while poets tend to fill it with something else, equally exotic, namely themselves. For the diffident and introspective author of A Rushed Quality and Bodying Forth, the X, while definitely human, is perhaps someone in general, equally distant from and equally intimate with both the writer and the reader in the very moment of their eponymous activity.

The start of it all was the perception of what was called the “rushed quality,” as something persistent and bothersome and of which there was no question of its ever being shed. Rather than evaded or denied, it was welcomed because it seemed for the first time since childhood to mark a structural occurrence presenting a new metaphysical datum. As it happened, this quality proved very elusive in its mature bothersomeness and the inquiry into it soon turned into a sort of quasi-theoretical fascination, which took as its main theme the fate of pure subjectivity — the utterly unfunctional, utterly useless, utterly dispensible feeling of being. The rushed quality is perhaps merely the sense of it draining away, or its long-sustained decrescendo.

Leaving the cinema this afternoon after attending a matinee with my children, we drove along a diagonal road straight towards the sun that had emerged from clouds low in the sky. The road was wet and the reflection was such that the entire length before us was a blindingly bright path of white light. Cars ahead of us shimmered and melted in silhouette, seeming to float gently in that no longer retinal space. It was sufficiently unusual to be remembered — not so much portentous in itself as a pointer to some other submerged possibility, another pointing, another pointing indefinitely. How do I begin saying the truth without changing anything, without any sort of position or imposture of knowledge? Everything already said is to be abandoned, yet one does not entrust to the moment but to that which lies far below it.

There are a number of ideas that run through many of the fragments, motivating beliefs of the writer, such as the inexhaustability and ungraspability of the moment, the existence of a direct connection to reality which is betrayed in every attempt to formulate it, and a skepticism about the bad infinities latent in the natural attitude. And of course there is a continued dialogue with various more or less identifiable thinkers and positions. But again, this is not philosophy, the arguments are virtual, and the stakes are something entirely different. Each of these pieces emerged in a renewed relation to the blank page. It is hoped that for the reader, apart from any resonances they may set in motion, they retain some of the qualities of silence, expectation, and impossibility that gave birth to them.

David Odell was born in Melbourne, Australia in 1951. He has a PhD in Mathematics and graduate degree in Literary Studies. He currently works as a statistician for an insurance-related technology company, providing an entirely fictive relationship to Wallace Stevens, Franz Kafka, and Charles Ives.