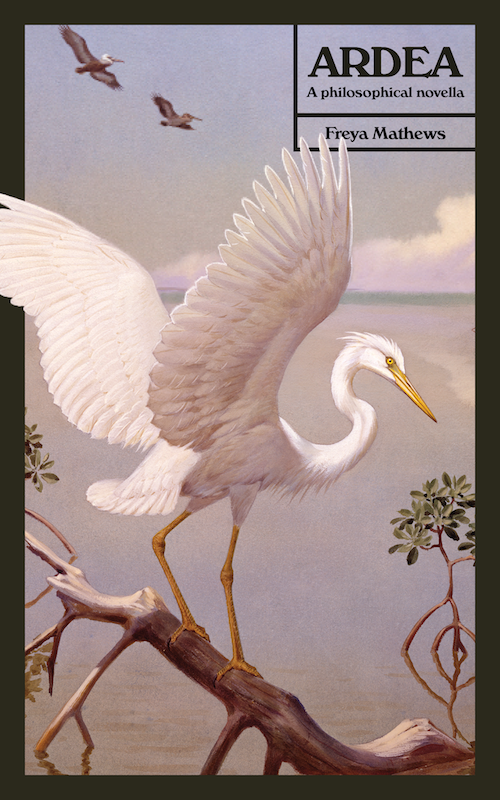 This elegant volume exceeds Coetzee’s Lives of Animals, interweaving philosophical debate and narrative to expose the ways our interspecies relations index our larger relationship with life, with environments, and with ourselves. Ardea champions empathy and storytelling as our best hope for repairing these broken relationships with this earth, and with one another. It’s a Faustian tale, braided with allusions to Jewett’s A White Heron and Coleridge’s albatross. Placing the dying bird in our arms, Mathews leaves it up us — as readers and as environmental citizens — to finish the story.

~ Greta Gaard, author of The Nature of Home: Taking Root in a Place

If, as the fictional ecophilosopher Ardea speculates in this novella, it is indeed the case that it is only through stories that morality acquires emotional force, then we surely need more stories such as the one that (actual) ecophilosopher Freya Mathews narrates so compellingly here. Tapping deep into the mythopoetic wellspring of the Faust legend, Ardea conjures a contemporary counterpart to Goethe’s prototypical modern man. This is a Faust for the Anthropocene. His searing story opens a path of profound reconnection with the rest of life in a historical moment when so many lives, human and otherwise, are imperiled by the power- and profit-driven course of development initiated by his Goethean forbear. Revivifying the genre of moral-philosophical tale deployed, for example, by Voltaire in Candide, Mathews deftly engages the reader in intellectual reflection on ecological ethics and politics. At the same time, she draws them imaginatively and affectively into the ontopoetic journey traversed by her postmodern counter-Faust: a figure who will have to bargain, not with the loss of his soul, but rather with its discovery.

~ Kate Rigby, author of Topographies of the Sacred: The Poetics of Place in European Romanticism and Dancing with Disaster: Environmental Histories, Narratives, and Ethics for Perilous Times

What is soul? Can it be forfeited? Can it be traded away? If it can, what would ensue? What consequences would follow from loss of soul — for the individual, for society, for the earth?

In the early nineteenth century, Goethe’s hero, Faust, became a defining archetype of modernity, a harbinger of the existential possibilities and moral complexities of the modern condition. But today the dire consequences of the Faustian pact with the devil are becoming alarmingly visible. In light of this, how would Goethe’s arguably flawed drama play out in a 21st-century century setting? Would a contemporary Faust sign up to a demonic deal? Indeed what, in the wake of two hundred years of social and economic development, would be left for the devil to offer him? A contemporary Faust would already possess everything the original Faust in his ascetic cloister lacked — affluence and mobility; celebrity and worldly influence; access to information; religious choice; sexual freedom and the availability of women — though women, it must be noted, currently also partake of that same freedom. The only thing a present-day Faust would lack would be his soul. Would he miss it? Does soul even exist? If it does, it would of course be the one thing the devil could not bestow. So from what or whom could Faust retrieve it? What, in a word, would a contemporary Faust most deeply desire?

In pursuit of these questions, Ardea engages a familiar but possibly faulty archetype, that of Faust, with an unfamiliar one, that of the white heron, borrowed from a short story of the same name by nineteenth-century American author, Sarah Orne Jewett. In Jewett’s tale, a soul-pact of an entirely different kind from that entered into by Faust is proposed. It is a pact with the wild, a pledge of fealty, of non-forfeiture, that promises to redraw the violent psycho-sexual and psycho-spiritual patterns that have underpinned modernity. How would a present-day heir to the Faustian tradition, ingrained with the habit of entitlement but also burdened with the consequences of the old pact, respond to the new proposition?

Freya Mathews is Adjunct Professor of Environmental Philosophy at Latrobe University, and Adjunct Professor at the Monash Sustainability Institute, Monash University. Her books include The Ecological Self (1991), Ecology and Democracy (editor) (1996), For Love of Matter: a Contemporary Panpsychism (2003), Journey to the Source of the Merri (2003), Reinhabiting Reality: Towards a Recovery of Culture (2005). She is the author of over seventy articles in the area of ecological philosophy. Her current special interests are in ecological civilization; indigenous (Australian and Chinese) perspectives on “sustainability” and how these perspectives may be adapted to the context of contemporary global society; panpsychism and the critique of the metaphysics of modernity; and wildlife ethics in the context of the Anthropocene. In addition to her research activities she manages a private biodiversity reserve in Central Victoria. She is a fellow of the Australian Academy of the Humanities.