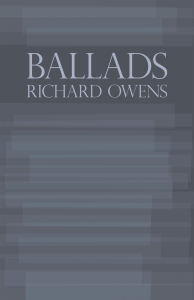 Ballads uses the lyric form to explore the effects of global Capitalism from a sharp Marxist perspective. Recognizing the congruence between folk song circulation and the circulation of money, the “currency” of the ballad alongside supply-side economics, Owens hails Wordworth’s Lyric Ballads experiment (undertaken at the dawn of England’s Industrial Age) as one touchstone. But he also understands the built-in obsolescence of the form, its tendency to hearken back to imaginary origins. “[E]veryone has an idea they know what a ballad is,” Owens writes in his “Working Notes.” “It’s this degraded thing shot through with a sense of pastness, cultural infancy and a charming but sometimes dangerous rusticity that needs to be carefully framed and reined.” Thus Owens’ Ballads playfully engages with language, figures, and forms from medieval and early modern England, with nods to the caesura-based, alliterative line, and Barbara Allan, Thomas the Rhymer, and Piers Plowman making appearances in the book’s brief lyrics.

Richard Owens is the author of several volumes of poetry, including Ballads (first published with Habenicht in 2012) and No Class (Barque Press, 2012), as well as scholarly articles on contemporary Anglophone poetry and political economy. Since 2005 he has edited Damn the Caesars, a journal of poetry and poetics, and Punch Press.