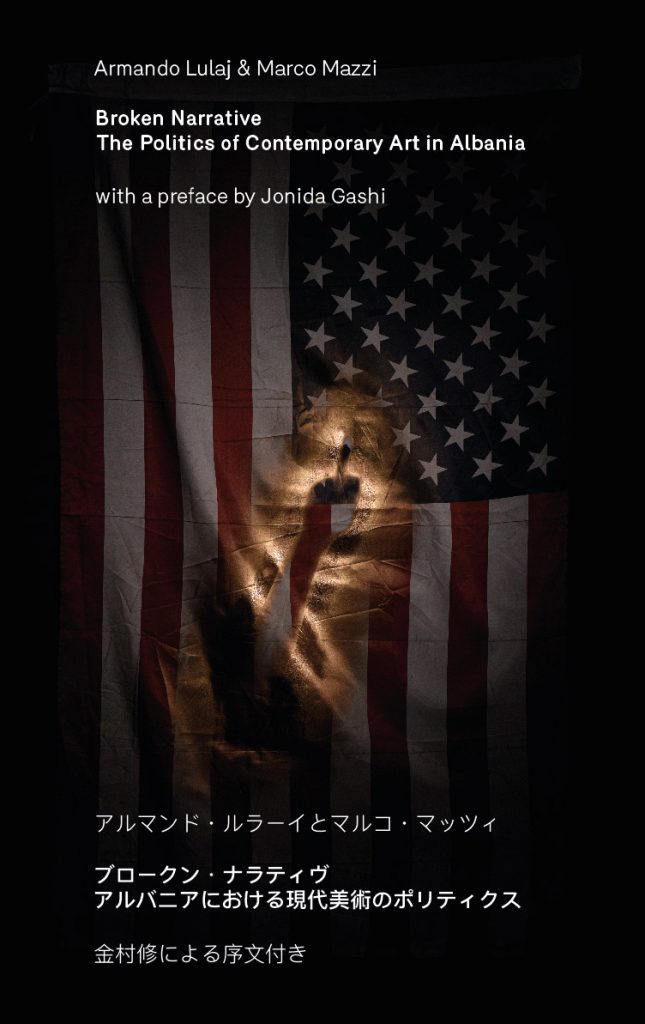 Broken Narrative, a dual-language English-Japanese edition, is a mirror of complexity encompassing history, politics, and contemporary art, which revolves around the cornerstones of Armando Lulaj’s artistic practice. The core of the book is formed by and extended interview of Lulaj by Marco Mazzi. This inquiry starts in the year 1997, a year of social and political upheaval in Albania, of anarchy, controversies and emigration, of toxic seeds of neoliberalism sprouting in an already wounded country, and continues to the present day, where politics, hidden behind art forms, has practically destroyed (again) every different and possible future of the country. This volume also sketch out a connection between the recent Albanian political context and contemporary art today, by considering the realities of Albania as essential for an understanding of the dynamics of international power in contemporary art and architecture, and the role of politics therein.

Broken Narrative represents an attempt to make political art in the actual international creative situation, which seems to be increasingly deaf to proposals charged with critical and subversive thinking. The book is bilingual in English and Japanese, ideally evoking the subversive films of the Red Army, active in Japan at the turn of the 1960s and ’70s, but also a subtle esthetics of Japanese poetry, which has inspired many of the works of Armando Lulaj. Broken Narrative is introduced by the preface of Jonida Gashi for the English text and by Osamu Kanemura for the Japanese translation.

Armando Lulaj was born in Tirana in 1980. He is a writer of plays, texts on risk territories, filmmaker, and producer of conflict images. He’s research is orientated towards accentuating the border between economical power, fictional democracy, and social disparity in a global context. His main topics of interest remain power, corruption and institutional critique. Lulaj has participated in many international exhibitions and film festivals. His works are part of various important private and public collections. Armando Lulaj is one of the founders of DebatikCenter of Contemporary Art.

Marco Mazzi (1980) is an Italian photographer and writer living and working between Florence, Tokyo, and Tirana. Mazzi studied Contemporary Literature at the University of Florence and has also studied Japanese avant-garde art and visual poetry in Japan. In 2008, Mazzi founded the non-profit organization Relational Cinema Association within the University of Waseda in Tokyo. Mazzi was photographer-in-residence at The Department of Eagles (Tirana, Albania) during the conference Pedagogies of Disaster and for the project Lapidari, and he was the stage and still photographer for Armando Lulaj’s Recapitulation (2015), commissioned by the 2015 Venice Biennale’ s Albanian Pavilion.