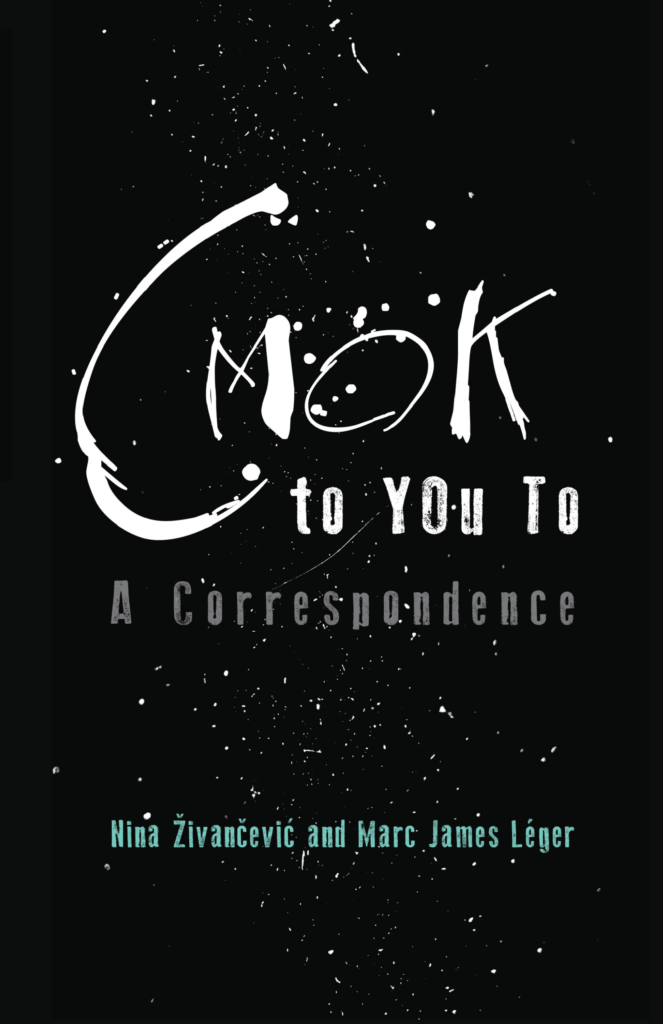 CMOK begins as a professional correspondence about ‘the idea of the avant garde’ and quickly evolves into a lived manifesto. The two never meet. Their relation is virtually lived, but deeply, compulsively felt. A Serbian exile living in Paris via New York, the poet Živančević is a dizzy and brilliant flâneuse. A scholar of Žižek and avant-garde art, Léger acts, by turns, as her provocateur, foil and fan. Punning wildly and goading each other on to exhilarating heights of confession and intellect, their correspondence dances around emptiness and despair but eventually flies above it. “We are already history,” Živančević writes. “I hope you agree to that.” CMOK is a stunning example of the correspondences two people can reach in its wake.

~ Chris Kraus, author of I Love Dick and Where Art Belongs

Our two authors hear that “knowledge does not sit still” (Wendell Berry) & so they take upon themselves that treacherous journey, with our packaged selves labeled “amusing collateral damage” stuffed into their rucksacks, as they charge up the windy, pot-hole-marred road to the mountaintop, where a Zen monk resting there observes with a smirk: “When you get to the top of the mountain, keep climbing.”

~ Bart Plantenga, author of Beer Mystic and Yodel in Hi-Fi

CMOK to YOu To presents the 2015 email correspondence of the Serbian-born poet, art critic and playwright Nina Živančević and Canadian cultural theorist Marc James Léger. In December of 2014 Léger invited Živančević to contribute a text to the second volume of the book he was editing, The Idea of the Avant Garde – And What It Means Today. Taken with each other’s idiosyncrasies, their correspondence gradually shifted from amiable professional exchanges and the eventual failure to organize a scholarly event to that of collaborating on some kind of writing project. Several titles were attempted for the eventual book – Marshmallow Muse: The Exact and Irreverent Letters of MJL and NZ, The Orange Jelly Bean, or, I Already Am Eating from the Trash Can All the Time: The Name of This Trash Can Is Ideology, The Secreted Correspondence of Mme Chatelet and Voltaire, and I’m Taken: The E-Pistolary Poetry of Kit le Minx and Cad – but none of these proved to be more telling than CMOK, the Serbian word for kiss, which sums up the authors’ quest for “harmony” in an altogether imperfect world and literary medium.

In this book, names of real people were changed in order to protect those who might otherwise be offended by the unguarded and absurdist commentary of its authors. Despite this fact, it is the fragility and elasticity of the writers’ superegos that is tested as they vacillate from personal registers to intellectual strata. At once a cis-avant-gardist’s exploration of anti-art and a poet’s claim to some weak form of autonomy, CMOK delights in both the pleasures of casual email and the sublime realizations of Jacques Lacan’s theory of sexuation. CMOK is a hybrid genre and a quest into the real of virtuality that defies the literary standards. Its authors, who never met, answer one another’s basic needs and questions, separated as they are by time zones and the ocean, but not culturally or spiritually.

Nina Živančević is a Paris-based poet, playwright, fiction writer, scholar, performer and art critic. A leading Serbian literary figure, Živančević published her first book in 1982 for which she won the National Award for poetry in Yugoslavia. From 1980 to 1981 she worked as a teaching assistant and secretary to Allen Ginsberg. Since that time she worked as a literary editor, correspondent and contributor to several publications, including New York Arts Magazine, Modern Painters, American Book Review, East Village Eye, République des lettres, Les Intempestives, Au Sud de l’Est, Theater X, Politika, El País, Woman (Spain), The Tribes, and Dnevnik. Besides having worked for the Living Theatre from 1988 to 1992, she co-founded the Odiyana Theatre. Author of more than twenty books, her principal works in English include I Was This War Reporter in Egypt (Leave Books, 1992), Inside & Out of Byzantium: Short Stories (Semiotext(e), 1994), The Death of New York City (Cool Grove Press, 2002), and Living On Air (Barncott, 2014). She has lectured at Naropa University, New York University, the Harriman Institute, St. John’s University in the U.S., and teaches the history of avant-garde theatre at Université Paris 8. She has worked in theatre and radio. Her plays have been performed in the United States and Great Britain.

Marc James Léger is an artist and independent scholar living in Montreal. He has published numerous essays, including pieces in Afterimage, Art Journal, C Magazine, Canadian Journal of Film Studies, Creative Industries Journal, Etc, FUSE, Journal of Aesthetics and Protest, Left Curve, Public, One + One Filmmakers Journal, Open, Parachute, Radical Criminology and Third Text. An essay on the aesthetic theories of Henri Lefebvre was published in Andrew Hemingway’s 2006 volume Marxism and the History of Art. He is author of Brave New Avant Garde (2012), The Neoliberal Undead (2013) and Drive in Cinema (2015), and editor of Culture and Contestation in the New Century (2011), The Idea of the Avant Garde – And What It Means Today, Volumes 1 and 2 (2015 and forthcoming), as well as editor of the catalogue for the 2014 Quebec City biennale, Resistance: And Then We Built New Forms. His “Interview with Allen Ginsberg’s Assistant (Nina Živančević)” is published in The End of Being (May 21, 2015).

One thought on “CMOK to YOu To”