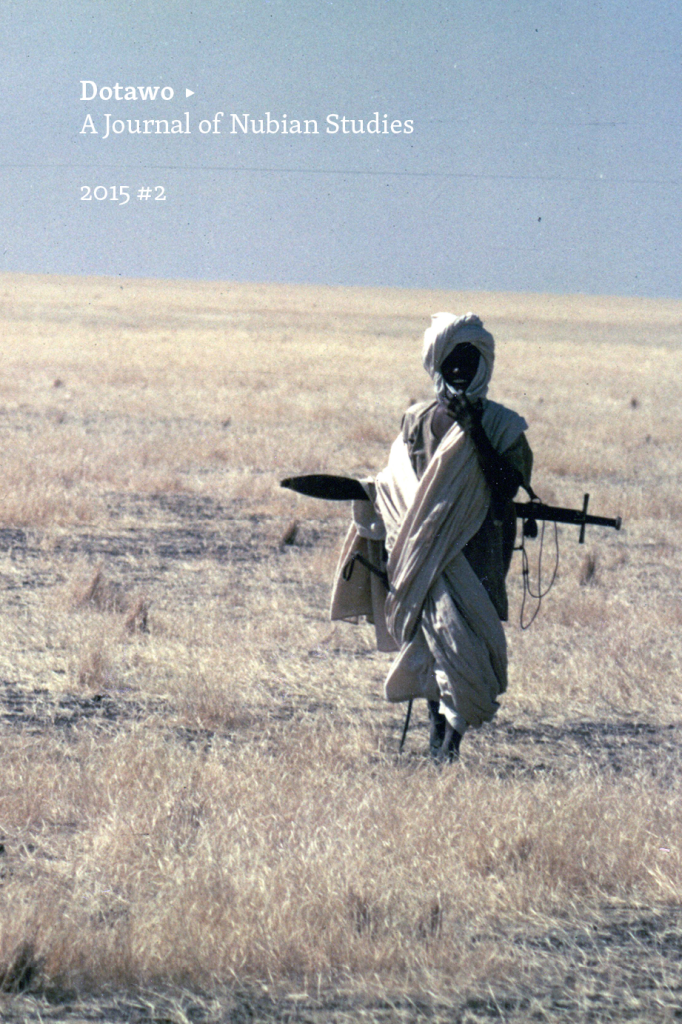 Dotawo: A Journal of Nubian Studies offers a multi-disciplinary, diachronic view of all aspects of Nubian civilization. It brings to Nubian studies a new approach to scholarly knowledge: an open-access collaboration with DigitalCommons@Fairfield, an institutional repository of Fairfield University in Connecticut, USA, and open-access publishing house punctum books.

The first two volumes of Dotawo have their origins in a Nubian language panel organized by Angelika Jakobi within the Nilo-Saharan Linguistics Colloquium held at the University of Cologne, May 22 to 24, 2013. Since many invited participants from Sudan were unable to get visas due to the shutdown of the German Embassy in Khartoum at that time, the Fritz Thyssen Foundation funded the organization of a second venue of specialists on modern Nubian languages. This so-called “Nubian Panel 2” was hosted by the Institute of African & Asian Studies at the University of Khartoum on September 18 and 19, 2013. This volume publishes the proceedings of that panel.

Future volumes will address three more themes: 1) Nubian women; 2) Nubian place names; 3) and know-how and techniques in ancient Sudan. The calls for papers for the first two volumes may be found on the back of this volume. The third volume is already in preparation with the assistance of Marc Maillot of the Section française de la direction des Antiquités du Soudan, Department of Archeology. We welcome proposals for additional themed volumes, and invite individual submissions on any topic relevant to Nubian studies.

Angelika Jakobi is a senior researcher and lecturer at the Institute of African Studies (Institut für Afrikanistik) of Cologne University in Germany. Since 1978 she has repeatedly carried out fieldwork in Sudan and Chad. Her research interests include descriptive and historical-comparative linguistics. Most of her research has focused on three Nilo-Saharan languages: Fur, Beria (Zaghawa), and Nubian. She is the author of A Fur Grammar (1990) and in cooperation with Tanja Kümmerle she has published The Nubian Languages: An Annotated Bibliography (1993). With Joachim Crass she has co-authored a grammar of Zaghawa written in French, Grammaire du beria (langue saharienne) (2004). Currently she is working on some Kordofan Nubian languages and Dongolawi (Nile Nubian).

Giovanni R. Ruffini is an Associate Professor of History and Classical Studies at Fairfield University in Fairfield, Connecticut. His publications include Social Networks in Byzantine Egypt (Cambridge, 2008) and Medieval Nubia: A Social and Economic History (Oxford, 2012). He is the founder and co-editor of the collaborative Medieval Nubia website.

Vincent W.J. van Gerven Oei studied composition, linguistics, conceptual art, and philosophy in the Netherlands, USA, and Switzerland. He studies under Christopher Fynsk at the Centre for Modern Thought at the University of Aberdeen and is Visiting Fellow at Tembusu College, National University of Singapore. The monograph Five Legal Interventions and the three-volume monumental survey Lapidari (punctum, 2015) are currently in preparation. He has translated the work of Jean Daive, Alessandro De Francesco, Hervé Guibert, Dick Raaijmakers, Avital Ronell, and Nachoem Wijnberg, among others, and his writings have appeared in journals such as continent., Frakcija, nY, Parmentier, postmedieval, and Theory & Event. Van Gerven Oei is director of the Department of Eagles foundation in Tirana and runs multilingual publishing house Uitgeverij. He is also one of the founding editors of the journal Dotawo: A Journal of Nubian Studies. Van Gerven Oei lives and works in Tirana, Albania.

One thought on “Dotawo: A Journal of Nubian Studies 2”