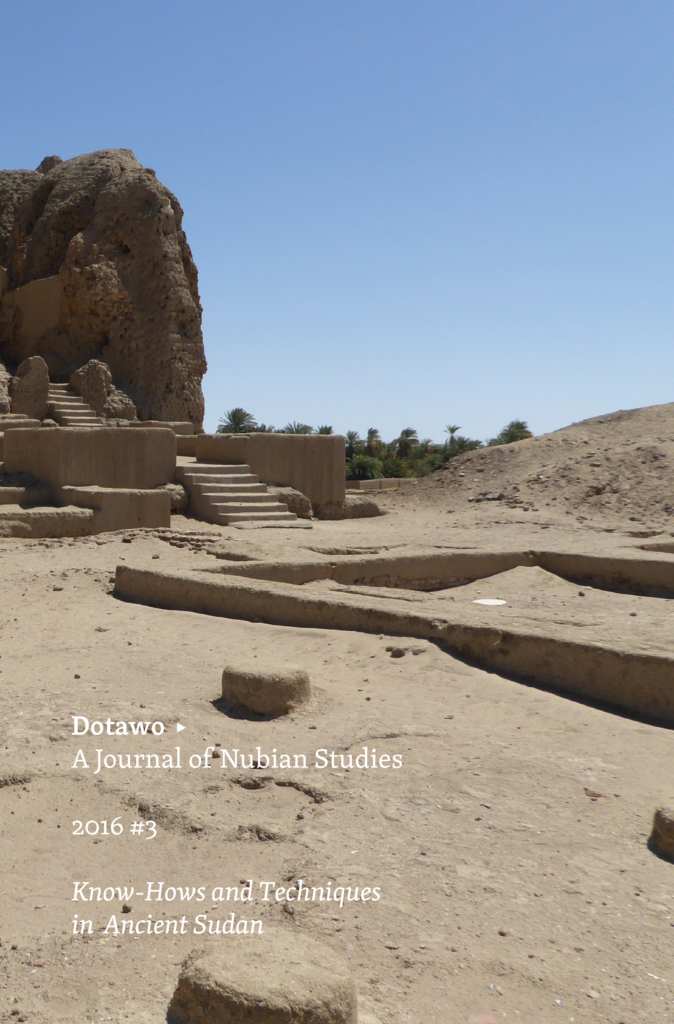 Dotawo: A Journal of Nubian Studies offers a platform in which the old meets the new, in which archaeological, papyrological, and philological research into Meroitic, Old Nubian, Coptic, Greek, and Arabic sources confront current investigations in modern anthropology and ethnography, Nilo-Saharan linguistics, and critical and theoretical approaches present in post-colonial and African studies. Dotawo gives a common home to the past, present, and future of one of the richest areas of research in African studies. It offers a crossroads where papyrus can meet internet, scribes meet critical thinkers, and the promises of growing nations meet the accomplishments of old kingdoms.

The third volume of Dotawo, guest-edited by Marc Maillot, is dedicated to Know-Hows and Techniques in Ancient Sudan. This collection of articles is the result of a workshop held at Lille University on September 5 and 6, 2013, which brought together several Sudanese archaeology scholars, from architecture to iron production through pottery and textile industry. Organized by Faïza Drici, Marie Evina, and Romain David, with the support of Charles de Gaulle-Lille 3 University and the laboratoire de recherche Halma-Ipel UMR 8164 (Centre national de recherche scientifique – CNRS), this workshop was presided over by Vincent Rondot (present Director of the Egyptian Antiquities Department of the Louvre Museum and former Director of Section française de la direction des antiquités du Soudan – SFDAS). The idea of an academic publication of this workshop in Dotawo was presented by Marc Maillot (SFDAS) in September 2014, during the 13th International Conference for Nubian Studies. The project was warmly welcomed by the editorial committee, and gave birth to a fruitful SFDAS/Dotawo cooperation that started a year ago.

Marc Maillot received his Ph.D. from Sorbonne University in 2013, and is now an associate member of the UMR 8167 “Orient et Méditerranée” (French National Research Center-CNRS). Before his appointment as a Courtesy Assistant Professor at University of Central Florida in 2015, Dr. Maillot conducted seminars on late antiquity urbanism and architecture at Paris-Sorbonne University, and Shendi University in Sudan. His research interests include vernacular architecture both in Egypt and Sudan, Meroitic iconography, Social Anthropology, and urbanism in antiquity. Dr. Maillot has worked on archaeological sites abroad since 2007, with a special focus on the Middle Nile Valley, on sites such as Muweis, el-Hassa, and Sai Island. His field experience also includes the archaeology of Roman settlements in France, particularly on the shores of the Marne River. His past research has been focused on technical approaches to the study of cultural transmission, and more specifically on the theme of casemate foundations for monumental brick structures along the Nile. Dr. Maillot’s current research focuses on the Osirian cult practice in the Meroitic royal pageantry, architectural representation in the iconography of the Middle Nile Valley, and late antiquity Sudanese towns as production machines for a centralized power based at Meroe.

One thought on “Dotawo: A Journal of Nubian Studies 3”