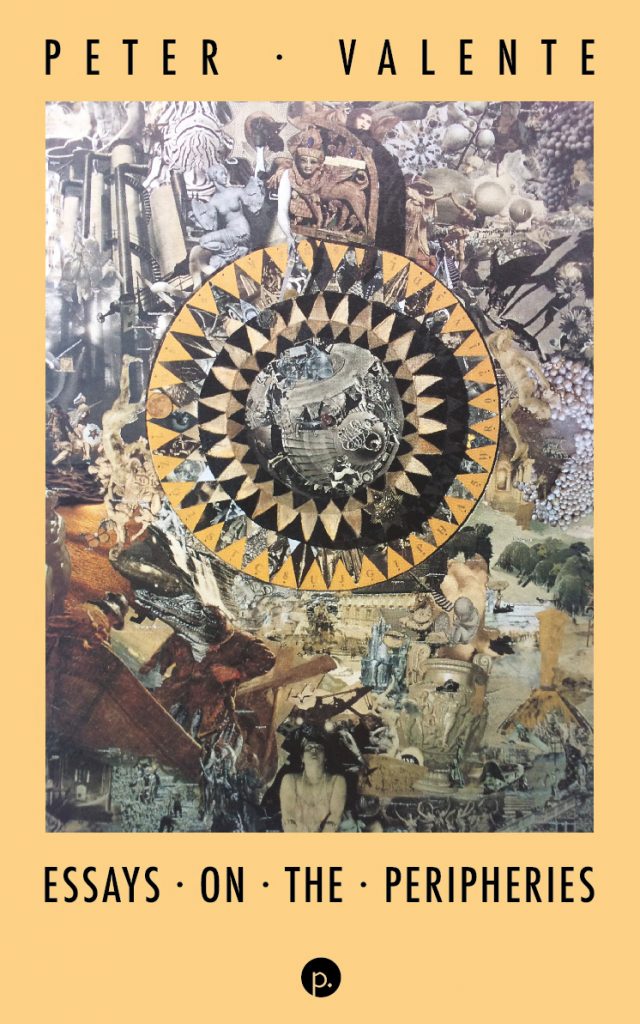 “Reading Peter Valente’s essays in Essays on the Peripheries feels like discovering treasures, carelessly neglected and left in the attic of our civilization and our own psyches. In these essays one discovers the personal obsession of a writer or the singular achievement of a poet, mostly neglected by the general public, or a jazz movement, creating a totally new sound, that has not yet entered the official history of the music. Each essay opens itself up to the world that surrounds its subject.” ~ Murat Nemet-Nejat

Essays on the Peripheries contains essays written by translator and scholar Peter Valente over a twenty-year period, stretching from the 1990s to 2019. They are a record of literary exploration and discovery, concerned with the recovery of lost works, with those writers whose works were out of print or hard to find, and whose names were somehow not fashionable in the current discourse, but who are important nevertheless. Edouard Roditi, Barbara Barg, and Tom Savage, for example, should be better known, but their books are largely ignored. This collection of essays highlights those works on the periphery, such as Turkish poets Seyhan Erözçelik and Küçük İskender, while it also includes several essays on better-known queer authors like Pierre Guyotat and Pier Paolo Pasolini, focusing on often overlooked qualities in their work that bear looking at closely.

These essays on works of literature are complemented by a number of texts on jazz, again highlighting important and interesting figures in the world of jazz and free improvisation that may have fallen through the cracks, such as the pianist Richard Twardzick and the Ganelin trio, which recorded their great experimental work Ancora da Capo in 1980, behind the Iron Curtain. Attention is also to given to more popular figures such as Stan Getz. The volume is completed with a series of essays reappraising Roman poets in the twenty-first century, offering fresh new translations and readings of authors such as Catullus and Callimachus.

A collection of essays, like an anthology, is by its nature incomplete. Essays on the Peripheries is a kind of sketch, rather than a finished portrait, of the author’s changing impressions on various subjects over the years.

Peter Valente is the author of A Boy Asleep Under the Sun: Versions of Sandro Penna (punctum books, 2014), which was nominated for a Lambda award, The Artaud Variations (Spuyten Duyvil, 2014), Let the Games Begin: Five Roman Writers (Talisman House, 2015), Catullus Versions (Spuyten Duyvil, 2017), two books of photography, Blue (Spuyten Duyvil) and Street Level (Spuyten Duyvil, 2016), two translations from the Italian, Blackout by Nanni Balestrini (Commune Editions, 2017) and Whatever the Name by Pierre Lepori (Spuyten Duyvil, 2017), Two Novellas: Parthenogenesis & Plague in the Imperial City (Spuyten Duyvil, 2017), a collaboration with Kevin Killian, Ekstasis (blazeVOX, 2017) and the chapbook, Forge of Words a Forest (Jensen Daniels, 1998). He is the co-translator of the chapbook, Selected Late Letters of Antonin Artaud, 1945–1947 (Portable Press at Yo-Yo Labs, 2014), and has translated the work of Gérard de Nerval, Cesare Viviani, and Pier Paolo Pasolini, as well as numerous Ancient Greek and Latin authors. His poems, essays, and photographs have appeared in journals such as Mirage #4/Periodical, First Intensity, Aufgabe, Talisman, Oyster Boy Review, spoKe, and Animal Shelter. His work has also been published online in Talisman, The Poems and Poetics Blog, Oyster Boy Review, Jacket2, Sibilia, The Recluse, Dispatches From the Poetry Wars, and the Verso Books blog. His translation of Guillaume Dustan’s Nicolas Pages is forthcoming from Semiotext(e). In 2010, he turned to filmmaking and has completed 60 shorts to date, 24 of which were screened at Anthology Film Archives.