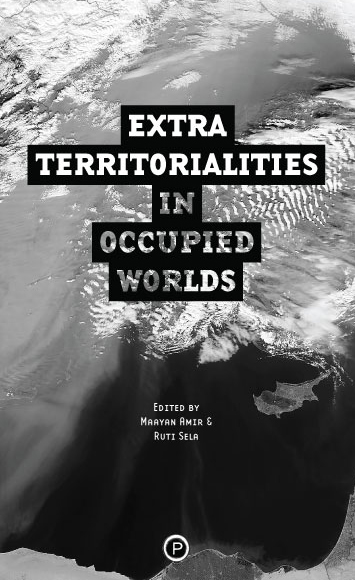 Extraterritorialities in Occupied Worlds tries to capture the substance of our time in the net woven of concepts. It’s tremendously well-aimed and hits the bullseye.

The concept of extraterritoriality designates certain relationships between space, law, and representation. This collection of essays explores contemporary manifestations of extraterritoriality and the diverse ways in which the concept has been put to use in various disciplines. Some of the essays were written especially for this volume; others are brought here together for the first time. The inquiry into extraterritoriality found in these essays is not confined to the established boundaries of political, conceptual, and representational territories or fields of knowledge; rather, it is an invitation to navigate the margins of the legal–juridical and the political, but also the edges of forms of representation and poetics.

Within its accepted legal and political contexts, the concept of extraterritoriality has traditionally been applied to people and to spaces. In the first case, extraterritorial arrangements could either exclude or exempt an individual or a group of people from the territorial jurisdiction in which they were physically located; in the second, such arrangements could exempt or exclude a space from the territorial jurisdiction by which it was surrounded. The special status accorded to people and spaces had political, economic, and juridical implications, ranging from immunity and various privileges to extreme disadvantages. In both cases, a person or a space physically included within a certain territory was removed from the usual system of laws and subjected to another. In other words, the extraterritorial person or space was held at what could be described as a legal distance. (In this respect, the concept of extraterritoriality presupposes the existence of several competing or overlapping legal systems.) It is this notion of being held at a legal distance around which the concept of extraterritoriality may be understood as revolving.

This volume is a part of Amir and Sela’s Exterritory Project, an ongoing art project that wishes to encourage both the theoretical and practical exploration of ideas concerning extraterritoriality in an interdisciplinary context. The project aims not only to draw on existing definitions of extraterritoriality but seeks also to charge it with new meanings, searching for ways in which the notion of extraterritoriality could produce a critique of discriminating power structures and re-articulate new practical, conceptual, and poetical possibilities.

The Exterritory Project is an art project that takes shape through the creation of artworks, research, varied interventions and public events. Exterritory is part of an ongoing collaboration between Ruti Sela and Maayan Amir whose art works have been presented in exhibitions such as the Biennale of Sydney, the Istanbul Biennial, the Berlin Biennial, Manifesta, the Union of Comoros Biennial in Moroni and at venues such as the Tate Modern, Centre Pompidou, Jeu de Paume, Art in General, New Museum, Stedelijk Museum, Ludwig Museum, the Fondazione Sandretto Re Rebaudengo, and HKW in Berlin, among many others. In 2011, Ruti Sela and Maayan Amir received the Young Artists award from UNESCO for their work on Exterritory. Research by Exterritory has been published in books by Sternberg Press (New York and Berlin) and Multitudes (Paris), as well as in various journals.

One thought on “Extraterritorialities in Occupied Worlds”