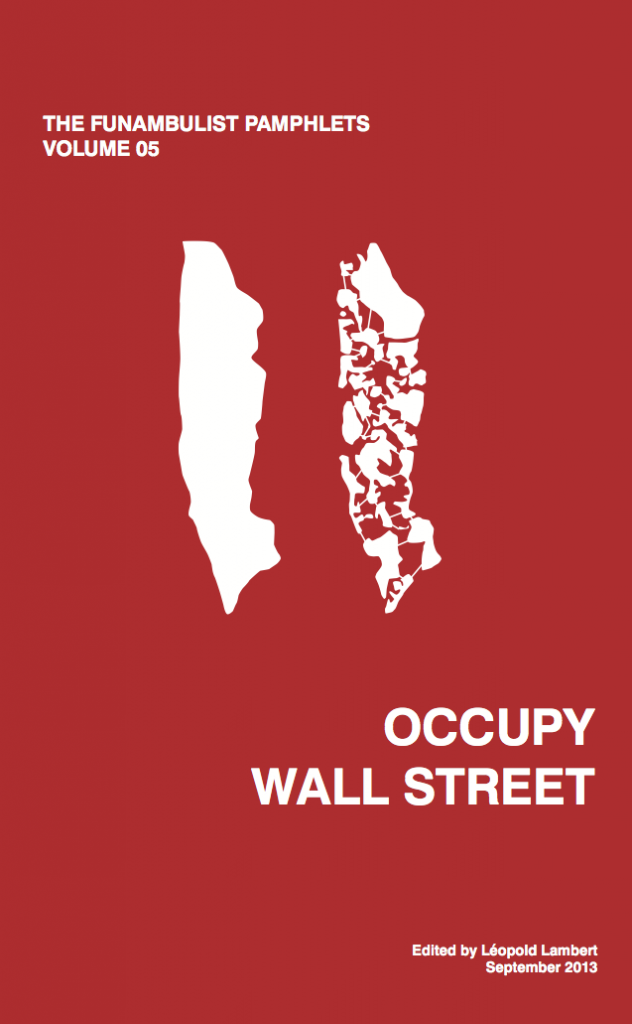 To choose to be a body in public, susceptible to encounter other bodies, or to stay in the protected space of the private: that is the elementary dimension of that choice. To form a collective body or to insist on the individuality of one’s own body: that is another one.

The Funambulist Pamphlets is a series of small books archiving articles published on The Funambulist, collected according to specific themes. These volumes propose a different articulation of texts than the usual chronological one. The eleven volumes are dedicated to Spinoza, Foucault, Deleuze, Legal Theory, Occupy Wall Street, Palestine, Cruel Designs, Arakawa + Madeline Gins, Science Fiction, Literature, and Cinema. See all published pamphlets HERE.

Volume 05_Occupy Wall Street includes: Introduction: My Body Is a Political Weapon — Photographs of Occupy Wall Street — “I Am a Citizen of Liberty Square” — Urban Insurgencies: Algiers’ Labyrinthine Casbah vs. New York’s Weaponized Grid Plan — “Mic-Check!”: Human Transmission Technology — “This is What Democracy Looks Like” Is Not Just a Slogan — Why We Should Stop Calling Occupy Wall Street a Protest — Spatial Issues at Stake in Occupy Wall Street: Considering the Privately Owned Public Spaces — The Tremendous Power of Space — The Archipelago as a Territorial Manifesto — About the Notion of Occupying — Judith Butler to the Occupy Movement: “This is a Politics of the Public Body” — Occupy the Department of Buildings — Creating the Urban Labyrinth in an Orthogonal Street Grid — National Security Drones vs. Liam Young’s Electronic Counter-Measures — Aestheticizing Violence + Capitalizing on the Revolt Imaginary — Impetus — Occupy Gezi: Why Are Politicians Afraid of Bodies — The Republic of Taksim — What Is a People? — The Political Archipelago: For a New Paradigm of Territorial Sovereignty — Official Report on the Question of the so-called New York Commune — The New York Commune [Film in Progress]