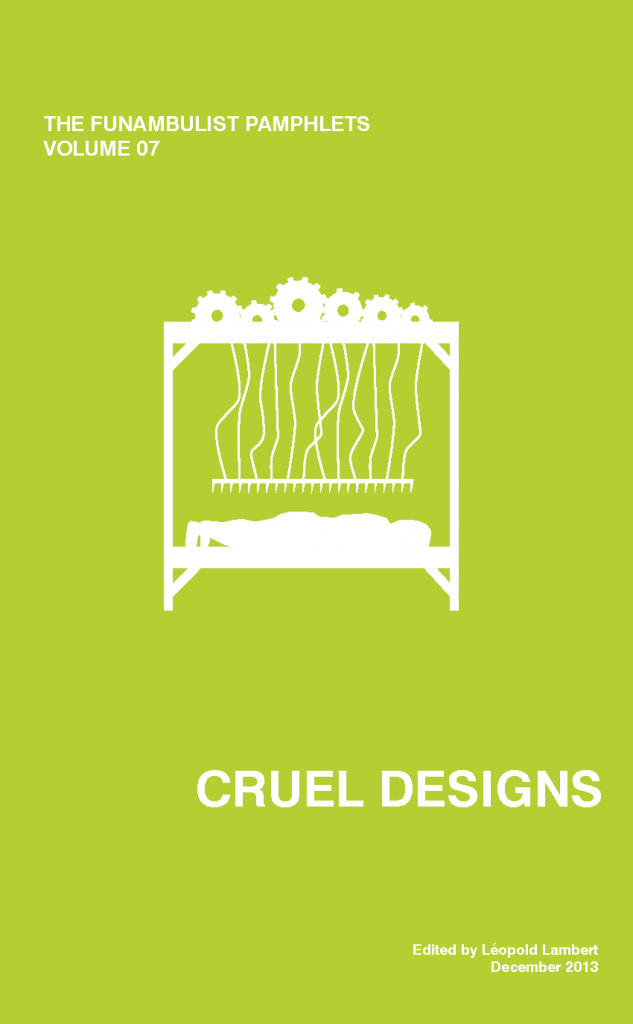 The violence that architecture carries in itself towards bodies is the same regardless of the intent, yet the way it is used is not exactly the same when it manifests itself consequently rather than deliberately. Cruel designs are purposely conceived to use this violence in order to assert an absolute power on one or several bodies.

Volume 06_Cruel Designs includes: Introduction: What Is Cruel Design? — Violence on the Body: A Manual for the French Police Escorting Illegal Immigrants — The Handcuffs of the Future — The Straightjacket & the Guillotine — The Thanatopolitics of Death Penalty — The Precise Design of Torture in Kafka’s Penal Colony — What Constitutes “the Act of Killing” — The Absolute Power of a Body over Another in Sade — The Corset: “A Body Press,” Paradigm of the Violence of Design on the Body — Carceral Treadmill — To Design a Prison, or Not to Design a Prison: What About a Hippocratic Oath for Architects? — From Student Design to Conservative Policies: Dutch Politician Fleur Agema’s Scheme (by Jonas Staal) — The Open Warehouse as the New Carceral Paradigm — The Eastern State Penitentiary Panopticon: The Materialization of the Diagram and Its Fallibility — The Ordinary Violence of the Colonial Apparatuses in the West Bank — Cruel Bench — Innocent Stairs? The Killing Steps of the Mayans — Sadian Architecture / An Architectural Narrative (by Eduardo McIntosh)