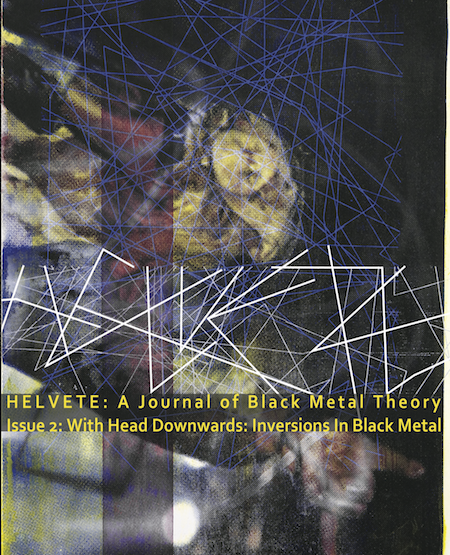 Not to be confused with metal studies, music criticism, ethnography, or sociology, Helvete: A Journal of Black Metal Theory is a speculative and creative endeavor, one which seeks ways of thinking that count as Black Metal events — and indeed, to see how Black Metal might count as thinking. Theory of Black Metal, and Black Metal of theory. Mutual blackening. Therefore, we eschew any approach that treats theory and Metal discretely, preferring to take the left-hand path by insisting on “some kind of connaturality between the two, a shared capacity for nigredo.”

Issue 2 focuses on the theme of Inversions in Black Metal. Nailed at the heart of many a logo, suspended from the neck, held out in Satanic blessing: the inverted cross is one of black metal’s anti-icons. The antithesis of a revelation of light, it signifies an originary blasphemy. Forsaking ascension and mining a path towards the centre of the earth, black metal finds a satanic stain lodged at the core of being. However, the significance of this movement is not bound by a simple reversal. The inverted cross hangs above a swarming logic of inversion: the overturning of Christianity, but also a mimesis of Christian self-desecration; the rejection of certain forms of religion, but also of modernity’s pallid enlightenment; the invocation of strange gods of the earth, even as the earth is cursed. When thought becomes poison, it is no longer so easy to determine which way is up and which way is down. To throw down one’s head, to push oneself into the cursed earth, to occupy the place of the inverted crucified: is this to think-by-not-thinking an unconditioned rapture beyond negation and affirmation?

Table of Contents // “The Swarming Logic of Inversion and the Elevation of Satan,” by Steven Shakespeare and Niall Scott — “Through the Looking Glass Darkly: Medievalism, Satanism, and the Dark Illumination of the Self in the Aesthetics of Black Metal,” by Brenda S. Gardenour Walter — “The Way of the Sword: Christianity, Fascism, and the Folk Magic of Black Metal,” by Reuben Dendinger — “A Sterile Hole and a Mask of Feces,” by Bert Stabler — ART PORTFOLIO: “Eccentricities and Disorientations: Experiencing Geometricies in Black Metal,” curated by Elodie Lesourd and Amelia Ishmael [featuring artwork by: Dimitris Foutris, Gast Bouschet and Nadine Hilbert, Andrew McLeod, Sandrine Pelletier, and Stephen Wilson] — “Giving Life Harmoniously: Animal Inversion in Cattle Decapitation,” by Erik van Ooijen — “Contempt, Atavism, Eschatology: Black Metal and Bergson’s Porous Inversion,” by Louis Hartnoll

2 thoughts on “Helvete 2: With Head Downwards: Inversions in Black Metal”